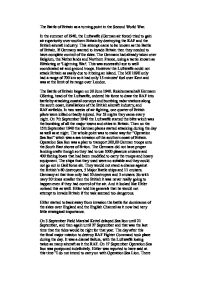 The Battle of Britain as a turning point in the Second World War.In the summer of 1940, the Luftwaffe (German air force)

The Battle of Britain as a turning point in the Second World War. In the summer of 1940, the Luftwaffe (German air force) tried to gain air superiority over southern Britain by destroying the RAF and the British aircraft industry. This attempt came to be known as the Battle of Britain. If Germany wanted to invade Britain then they needed to have complete control of the skies. The Germans had already taken over Belgium, the Netherlands and Northern France, using a tactic known as Blitzkrieg or 'Lightning War'. This was successful sue to well coordinated air and ground troops. However the Luftwaffe could not attack Britain as easily due to it being an island. The ME 109E only had a range of 700 km so it had only 15 minutes' fuel over Kent and was at the limit of its range over London. The Battle of Britain began on 30 June 1940. Reichsmarschall Hermann G�ering, head of the Luftwaffe, ordered his force to draw the RAF into battle by attacking coastal convoys and bombing radar stations along the south coast, installations of the British aircraft industry, and RAF airfields. In two weeks of air fighting, one quarter of British pilots were killed or badly injured. For 53 nights they came every night. On 7th September 1940 the Luftwaffe started the blitz witch was the bombing of all the major towns and cities in Britain. Then on the 15th September 1940 the German planes started attacking during the day as well as at night. The whole point was to make way for "Operation Sea lion" witch was a sea invasion of the southern coast of Britain. Operation Sea lion was a plan to transport 300,00 German troops onto the South East shores of Briton. The Germans did not have proper landing crafts though so they had to use 1000 pleasure cruisers and 400 fishing boats that had been modified to carry the troops and heavy equipment. ...read more.

This won us the Battle of the Atlantic and gave us superiority of the seas. The reason that I believe this was a greater turning point than the Battle of Briton was because apart from us not being able to be placed under siege, the German's plans were considerably poorer than in other invasions. This is because even if Hitler had had managed to fulfil the first part of the invasion plan by destroying the RAF, the Germans would still have to of actually of got all of their troops across the channel. So as Britain had superiority of the sea the destroyers, along with the rest of Britons huge Navy would have had no problem destroying the German troop ships before they reached Britain. Here was one turning point in the war that is not a big battle and did not cost lives. It would not seem like a big deal now but then it was a revolution. It was when the industries started employing women due to the fact that men between the ages of 18 and 45 were called up for military service and so all the men that were doing the jobs that were important o the war effort were having to leave. However in 1941 there were large numbers of unemployed women in Briton. A lot of the industries did not waste a lot of time in employing the women to help in the war effort. Many went into the 'women's services', these were, the Auxiliary Territorial Service or A.T.S. Women's Auxiliary Air Force known as the W.A.A.F.s, and the Women's Royal Navy Service, or W.R.N.s. Other women went into the munitions factories or land army (Farming). The women that went into the munitions factories were then famously know and referred to as Canaries due to Sulphur turning their skin yellow. This is a turning point in the war because without the employment of women, Britain would not have managed to sustain it's war effort and would not have had the manpower necessary to mount a large counterattack to the German army. ...read more.

The Battle of Britain was indeed an important turning point in the Second World War two however I do not believe that it was the most important turning point in the war. The Battle of Britain meant that we had air superiority, which meant that at D-Day we could afford to send the 12,000 planes in support. With out this the invasion of the beaches at Normandy could have gone a lot differently. However the Battle of the Atlantic meant that we had superiority of the sea. This was crucial as even if we lost the Battle of Britain and lost control of the skies we could still have defended the channel against the invasion forces of Operation Sea Lion, as they were transported by cruisers and fishing ships. Again even if we lost the Battle of Britain then we would still have had help from the Americans after Pearl Harbour. The fact that Hitler never seriously intended to invade England meant that the chance of being invaded after we lost the RAF was small, because instead he wanted to fulfil his ideological war of annihilation and gain Lebensraum through a successful invasion of the USSR. The evacuation of 330,00 troops at Dunkirk was more important than the Battle of Britain in my opinion as it meant that we still had an army to defend Britain even if we did not have an air force. This meant that even in the improbable invasion of Briton we would still have had a significant force to try and repel the Germans especially after the 16 new division that were based on the south coast and as a last resort the 1 million plus Home Guard. The Biggest turning point in the war was Germany attacking the USSR which ended with 75% of Germany's total loses in the whole war being destroyed there and giving Britain the chance to re-arm and build itself up in case Germany came back again, which they did not. The defeat of Germany then of course led to the defeat of Japan afterwards and the end of the war. ...read more.