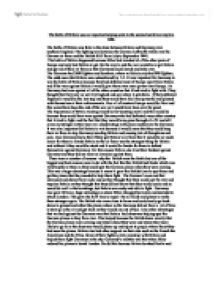 The battle of Britain was an important turning point in the second world war explain why. The battle of Britain was forte in the skies between Britain and Germany over southern England. The fighting was between the German Luftwaffe which was the German air force and the British RAF from July to September 1940. The battle of Britain happened because Hitler had invaded all of the other parts of Europe and only had Britain to get. So the way to end the war would be to get Britain and get rid of their air force so that Germany could invade and take over. The Germans had 2600 fighters and bombers, where as Britain only had 900 fighters. The odds were that Britain was outnumbered by 3:1. It was important for Germany to win the battle of Britain because they had defeated most of Europe apart from Britain and if the won against Britain it would give them even more power over Europe. As Germany had won against all of the other countries that it had tried to fight with. They thought that they may as well try England and see where it gets them. If they defeated England it would be the last step and they would have feel very powerful and pleased with themselves at their achievements. Also all of western Europe would be Nazi and this would have been the end of the war as it would have been over for good. The Importance of Britain winning would be for boosting moral and this would be because they would have won against Germany who had defeated every other country that it tried to fight, and the fact that they would have gone through all of it and still come out stringer as they were at a disadvantage with plane numbers to the Germans. It was also important for Britain to win because it would mean that they could keep their air force to stop Germany invading Britain and causing lots of disruptions and pain. ...read more.

This attack was meant and was purposed to try and end the war before the autumn. In this attack the Dutch only lasted a little while because they had lost of blanket bombings to their city and paratroopers landing unexpectedly and attacking them. This was part of the Blitzkrieg that paratroopers would drop down and defend and fight the allies. So Hitler obviously had his plans and tactics well thought out before he made his moves. Belgium were a little bit stronger and better at defending themselves apart from sometimes they were stopped and limited to what they could do and attack as refugees and people were going southwards along the roads that were filled with bombs, dead bodies and things that had been destroyed by the bombings. The French commander ordered his troops to follow the British troops northward to support them who had been sent to Belgium. This was quite bad as it left a vital 160 km of the French-Belgium border almost unprotected. This was bad as it gave the Germans advantage as they had no one to fight against if there was no one there as they were all in other places. The Nazi's were so powerful that the burst through the French line. Some of the soldiers moved to France and split the allied forces which were Britain and France in two. The rest that were left of the Nazi's went southwards to capture Paris. The remainder of the Soldiers went back Northwest to trap the British and the Belgium armies. About 500,000 or half a million soldiers were trapped in and around the little port of Dunkirk. Hitler was determined not to let any of those soldiers escape which were the British and French soldiers. However the British had boats ranging from battleships to private boats which had heard about them being trapped and wanted to help and so did everything that they could to get them out of the situation. ...read more.

Also the navy would not have got control over the seas and the RAF would not have bombed Germany and killed so many people. The British Victory was an important turning point because if Britain had not have won the battle of Britain it would have collapsed because it would have given Germany the chance to invade the country and ruin them. This would have given Germany full confidence and lots of power as it would have beaten every country that it had tried to fight against. And the power to really over run any country. It also changed the course of the war as other countries saw that Germany was not unbeatable if Britain could beat them and made other countries feel stronger and believe in themselves more. Also if we had not won it we would not have been able to invade Germany and kill so many of their civilians and take control over the seas. Britain's most important role in the war was a free base where the British and the American air forces could attack Germany and cause a land invasion which would leave us and then the war get taken back to Europe away from Britain. Really if Germany did invade Britain it would have been a different ending and things would have changed dramatically and Britain would have probably been wiped out but Germany did not invade and so things did not change. Britain would not have won if Hitler had been victorious. Time and time again before the Battle of Britain Hitler and his Blitzkrieg tactics had always worked and the other countries could not stand up to beat Germany. If this had worked against the British RAF as well Britain would have lost the war and it would have been over and done with the war in the west over and finished with. They did not win and so Britain gained the glory and became a stronger country and this gave them many advantages in the war and overall. ?? ?? ?? ?? ...read more.