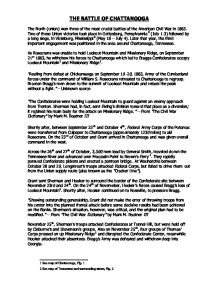 THE BATTLE OF CHATTANOOGA

THE BATTLE OF CHATTANOOGA The North (union) won three of the most crucial battles of the American Civil War in 1863. Two of these Union victories took place in Gettysburg, Pensylvannia2 (July 1-3) followed by a long siege, in Vicksburg, Mississippi2 (May 18 - July 4). Later that year, the third important engagement was positioned in the area around Chattanooga, Tennessee. As Rosecrans was unable to hold Lookout Mountain and Missionary Ridge, on September 21st 1863, he withdrew his forces to Chattanooga which led to Braggs Confederates occupy Lookout Mountain1 and Missionary Ridge1. "Reeling from defeat at Chickamauga on September 19-20, 1863, Army of the Cumberland forces under the command of William S. Rosecrans retreated to Chattanooga to regroup. Braxton Bragg's men drove to the summit of Lookout Mountain and retook the peak without a fight." - Unknown source "The Confederates were holding Lookout Mountain to guard against an enemy approach from Trenton. Sherman had, in fact, sent Ewing's division toward that place as a diversion; it rejoined his main body for the attack on Missionary Ridge." - From "The Civil War Dictionary" by Mark M. Boatner III Shortly after, between September 25th and October 4th, Federal Army Corps of the Potomac were transferred from Culpeper to Chattanooga (approximately 1230 miles) to aid Rosecrans. On the 23rd of October and Grant arrived in Chattanooga and was given overall command in the west. ...read more.

Grant rose to command all the Federal armies in the Civil War and lead them to victory. So great was his popularity that the people twice elected him to the presidency. He attended West Point university and not long after graduating served in the Mexican War and married Julia Dent. He left the army after their first son was born, but later returned when the civil war began. He originally never had any intentions of being a politician, but he ended up serving two terms as president. He died on July 23 1885, a week after finishing his personal memoirs, from throat cancer. General William Starke Rosecrans4 William S. Rosecrans was born in Delaware County, Ohio, on September 6, 1819. He graduated from the United States Military Academy at West Point in 1842. He left the Army in 1854 but returned to it at the start of the American Civil War. Rosecrans later became the commanding general of the Department of Ohio. After losing the battle of Chickamauga he lost his command and Gen. Ulysses S. Grant was made commander of all the western armies. Regardless of the loss, he was considered the best strategist of the Union forces. After the war he was minister to Mexico from 1868 to 1869, and he represented California in Congress from 1881 to 1885. He eventually retired to Redondo, California, where he died on March 11, 1898. ...read more.

These numbers were extremely similar to the Battle of Fredricksburg. At Chattanooga for every 1000 effectives in the Union Army 97 where shot. At Fredricksburg for every 1000 Union effectives engaged 103 were shot. Similarly at Chattanooga for every 1000 Union effectives they shot 44 Confederates. At Fredricksburg for every 1000 Union effectives they also shot the exact same 44 Confederates. The South was deeply affected by the great loss at Chattanooga which actually led to the dismissal of Bragg and Rosecrans. In turn, it was a great victory for the North and Grant was greatly respected after the wise decisions he made during this time. "Now it was Rosecran's turn to be discredited. Remarking that the general was "stunned and confused, like a duck hit on the head," Lincoln relieved him of command and placed the perilous situation in the hands of the North's most trusted leader, Ulysses S. Grant. Losing no time, Grant launched assaults that cleared the Confederates for m their positions on the heights of Lookout Mountain and Missionary Ridge. The South would never recover from the loss of Chattanooga, which brought Bragg's dismissal and opened the gateway to the Confederate heartland." - From "Echoes of Glory, Civil War Battle Atlas" published by Time Life Books. 1 See map of Chattanooga, Fig. 1 2 See map of Tennessee and surrounding states, Fig. 2 1 See map - Fig. 4 2 See photo - Fig. 6 3 See photo - Fig. 7 4 See photo - Fig. 8 1 See table, fig. 5 ...read more.