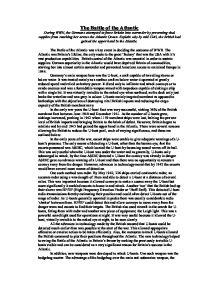 The Battle of the Atlantic.

The Battle of the Atlantic During WWII, the Germans attempted to force Britain into surrender by preventing vital supplies from reaching her across the Atlantic Ocean. Explain why by mid 1943, the British had gained the upper hand in the Atlantic. The Battle of the Atlantic was a key event in deciding the outcome of WWII. The Atlantic was Britain's lifeline, the only route to the great 'factory' that was the USA with it's vast production capabilities. British control of the Atlantic was essential in order to sustain supplies. German superiority in the Atlantic would have deprived Britain of commodities, starving her into almost certain surrender and prevented American access to mainland Europe in 1944. Germany's main weapon here was the U-boat, a craft capable of travelling above or below water. It was treated mainly as a surface craft as below water it operated at greatly reduced speed and relied on battery power. It dived only to infiltrate and attack convoys or to evade enemies and was a formidable weapon armed with torpedoes capable of sinking a ship with a single hit. It was virtually invisible to the naked eye when surfaced, as the deck only just broke the waterline and was grey in colour. U-boats mainly targeted merchant as opposed to battleships with the objectives of destroying vital British imports and reducing the cargo capacity of the British merchant navy. ...read more.

to learn specific anti-U-boat tactics. Each tactic was clearly defined and different tactics used depending on certain factors such as the location of the U-boat and the time of day. The new tactics helped to swing the battle Britain's way as they provided senior escort officers with efficient ways to hunt down U-boats. Also the better training at the W.A.T.U., which included a simulation of an Atlantic crossing called 'the game', allowed the senior escort officers to be able to effectively implement the new improved tactics. Although 'the game' was useful, it was no substitute for actual experience of anti-U-boat warfare. Often the most experienced escort groups were reorganised into 'hit squads' whose objective was not to escort convoys but to hunt down U-boats. The success enjoyed by these groups as the battle began to turn Britain's way was testament to the value of the experience gained by senior escort officers in the early years of war when success against U-boats was not as profound. Another British tactical change helped them greatly to gain control in the Atlantic. This was the relocation of the Royal Navy command from Plymouth to a new underground facility in Liverpool known as the Western Approaches HQ, the heart of which was the operations room which allowed the coordination of all the data from the Atlantic, such as suspected U-boat positions and weather reports. ...read more.

This was in contrast to the British attitude which placed value in experience. Another example can be seen in D�nitz, the commander of the U-boat fleet. In January 1943 he was promoted to Gro�admiral and given command of the whole of the Kriegsmarine. This somewhat diverted his attention and commitment from the U-boat cause. Further weaknesses were the inability to out-produce the allied nations and the inability to counter HF/DF by maintaining radio silence. In conclusion, no single factor caused Britain to gain the upper hand in the Atlantic by mid-1943. However, many of the contributing factors can be summarised by the notion that the British took a more open-minded approach. They were constantly evaluating, developing and changing every aspect of anti-U-boat warfare, whereas the Germans were reluctant to alter a system which had initially worked so effectively. There were many contributing technical factors. Often an advance in one area would demand an advance in another. For example, radar demanded better training so that it could be used effectively. This was key as it allowed improvement to be the mother of improvement. It is difficult to place the technical factors in any order of significance as often one factor was reliant on another. However if there was one factor more significant than any other it could be said to be the entry of the USA into the war as Britain became allied with one of the most rich and powerful nations on earth. ...read more.