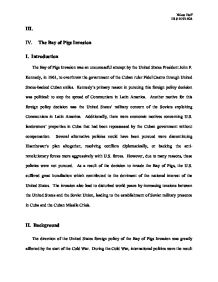 The Bay of Pigs Invasion

III. IV. The Bay of Pigs Invasion I. Introduction The Bay of Pigs Invasion was an unsuccessful attempt by the United States President John F. Kennedy, in 1961, to overthrow the government of the Cuban ruler Fidel Castro through United States-backed Cuban exiles. Kennedy's primary reason in pursuing this foreign policy decision was political: to stop the spread of Communism in Latin America. Another motive for this foreign policy decision was the United States' military concern of the Soviets exploiting Communism in Latin America. Additionally, there were economic motives concerning U.S. landowners' properties in Cuba that had been repossessed by the Cuban government without compensation. Several alternative policies could have been pursued were discontinuing Eisenhower's plan altogether, resolving conflicts diplomatically, or backing the anti-revolutionary forces more aggressively with U.S. forces. However, due to many reasons, these policies were not pursued. As a result of the decision to invade the Bay of Pigs, the U.S. suffered great humiliation which contributed to the detriment of the national interest of the United States. The invasion also lead to disturbed world peace by increasing tensions between the United States and the Soviet Union, leading to the establishment of Soviet military presence in Cuba and the Cuban Missile Crisis. II. Background The direction of the United States foreign policy of the Bay of Pigs Invasion was greatly affected by the start of the Cold War. During the Cold War, international politics were the result of rivalry between the United States and Communism in the case of the Soviet coalition, including Cuba (Rostow 210). In January 1961, increasing friction between the United States and Castro's leftist regime led President Dwight D. Eisenhower to break off diplomatic relations with Cuba, whom he saw as a Communist threat to stability in the Caribbean and Latin American region. Even before that, the Central Intelligence Agency (CIA) had been training and supplying antirevolutionary Cuban exiles in Guatemala for a possible invasion of the Bay of Pigs. ...read more.

In his novel, America Russia and the Cold War 1945-1990, LaFeber, like Hawkins, implies that the invasion was a major mistake and that the U.S. should have tried to resolve issues diplomatically. Secretary of State, Rusk, was also opposed to the Bay of Pigs invasion at the time. In his autobiography, Rusk states that he was opposed to the entire operation, meaning that his ideas coincide with LaFeber's ideas. He believed that the United States should have backed out of the plan and tried to resolve conflicts diplomatically. However, Rusk was also troubled by that idea because if they had conducted the operation overtly, it wouldn't have given the U.S. the chance to mobilize overt support that "we might have gotten from other nations" (Rusk 215). Therefore, three possible alternatives to the Bay of Pigs Invasion were canceling the operation, resolving conflicts diplomatically, or invading Cuba more forcefully. VI. Reasons Why Alternative Policies Were Not Pursued Rostow's policy to back the exiles with U.S. military forces more forcefully wasn't pursued for several reasons. Firstly, Kennedy "was not about to throw the full strength of the carrier-based aircraft into the battle," because he didn't want to reverse his fundamental position that this was a conflict between Cubans, not a war between the United States and Cuba. Secondly, the option of moving from an invasion to a guerilla operation was ruled out by geography and the choice of the invasion beach. Thirdly, a political concern for the United States was that the plan might have caused other nations to take part. For example, Rusk feared that the plan would provoke the Soviet Union to take action against American forces. Fourthly, the United States wasn't officially permitted to go to war with Cuba. Rostow, stated that, "there was an ancestral sense that the Monroe Doctrine had been unacceptably violated," and that "there was no basis in American foreign policy... ...read more.

Both of them must be embarrassed about the failure of the attack and are probably rationalizing the Bay of Pigs Invasion actions. Victor Lasky, author of J.F.K. the Man & the Myth: A Critical Portrait and Seeds of Treason, presents a highly controversial picture of Kennedy in this biography. However, in the foreign policy decision of the Bay of Pigs, he subtly supports the President's actions. He defends Kennedy in his Bay of Pigs decision by arguing that he had no alternative. This shows that the author is not completely one-sided in representing President John F. Kennedy. Nevertheless, Lasky's biography on Kennedy's was published in 1963 before the release of archives on the Bay of Pigs in the 1980's. This is a severe limitation because Lasky did not have the advantage of time and hindsight. Lasky's work is less balanced than LaFeber's, America Russia and the Cold War 1945-1990. There were many more documents and information available to LaFeber in 1991, than there was to Lasky in 1963, regarding the Bay of Pigs Invasion. Therefore, one could deduce that LaFeber's work is more reliable. LaFeber uses a more objective approach to give a more critical view of Kennedy's actions the Bay of Pigs Invasion, where Lasky merely supports the President. IX. Conclusion In conclusion, the unsuccessful Bay of Pigs Invasion in 1961 to overthrow the government of the Cuban ruler Fidel Castro by United States-backed Cuban exiles was a debacle. The goal of this foreign policy decision was to stop the spread of communism. Several alternative policies that could have been pursued were discontinuing Eisenhower's plan altogether, trying to resolve conflicts diplomatically, or taking it to the other extreme and backing the anti-revolutionary forces with U.S. military forces. However, due to political, economic, social, and geographic motives, these policies were not pursued. As a result of the invasion of the Bay of Pigs, the U.S. suffered immense humiliation which contributed to the detriment of the national interest of the United States. ?? ?? ?? ?? Nilou Huff IB # 0193-024 11 Nilou Huff IB # 0193-024 ...read more.