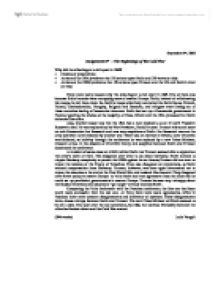 The Beginnings of the Cold War : Why did the allies begun to fall apart in 1945?

Truman was much more an anti-Communist that Roosevelt and was very suspicious of Stalin. But Roosevelt was not the only politician to be replaced by another one. There was an election in Britain, were Churchill was defeated, so halfway through the conference he was replaced by a new Prime Minister, Clement Attlee. In the absence of Churchill rivalry and suspicion between Stalin and Truman dominated the conference. A number of issues arose on which neither Stalin nor Truman seemed able to appreciate the other's point of view. The disagreed over what to do about Germany. ...read more.

They disagreed over Soviet policy in eastern Europe. At Yalta Stalin had won agreement from the allies that he could set up pro-Soviet governments in eastern Europe. Truman became very unhappy about the Russian intentions and adopted a "get tough" attitude towards Stalin. Comparing the Yalta conference with the Postdam conference, the first one had been much more successful than the last one. At Yalta there were more agreements, while in Postdam there were constant disagreements and difference of opinions. These disagreements were, almost always, between Stalin and Truman. The new Prime Minister of Britain seemed to be left a side. One year after the last conference, by 1946, the wartime friendship between the allies had broken down and the Cold War started. (394 words) Luc�a Voegeli ...read more.