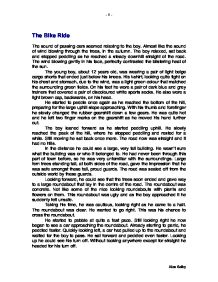 The Bike Ride The sound of passing cars seemed relaxing to the boy. Almost like the sound of wind blowing through the trees, in the autumn. The boy relaxed, sat back and stopped peddling as he reached a steady downhill straight of the road. The wind blowing gently in his face, perfectly contrasted the blistering heat of the sun. The young boy, about 12 years old, was wearing a pair of light beige cargo shorts that ended just below his knees. His t-shirt, looking quite tight on his chest and stomach, due to the wind, was a light green colour that matched the surrounding green fields. On his feet he wore a pair of dark blue and grey trainers that covered a pair of discoloured white sports socks. He also wore a light brown cap, backwards, on his head. He started to peddle once again as he reached the bottom of the hill, preparing for the large uphill slope approaching. With his thumb and forefinger he slowly changed the rubber gearshift down a few gears. He was quite hot and he left two finger marks on the gearshift as he moved his hand further out. The boy leaned forward as he started peddling uphill. He slowly reached the peak of the hill, where he stopped peddling and rested for a while. ...read more.

Suddenly he stopped rolling. Not knowing where he was, he still didn't open his eyes. He blacked out due to the pain. ~ Opening his eyes now, he thought to himself, where am I? He was very drowsy and tired. His left leg was now numb. He looked around and in the distance he could see people standing on the bridge. They were silent and all watching him. He then realised. He had been knocked off the road and into the river. He continued looking around, trying to see his bike. In the distance he could see one of his shoes lying on the bank but he couldn't see his bike. "Are you alright little boy?" an old lady shouted from the bank. "Yes, I'm fine." He replied. Still in shock he rolled over onto his side so he could see the old lady clearly. "The ambulance will be here soon. Don't worry. You'll be just fine." The old lady said, trying to comfort him, "What's your name little boy? "James" He said. The ambulance soon arrived and took James to hospital. His leg wasn't broken, fortunately. Lying in the hospital bed, he thought of the car that had hit him. Did it stop? ...read more.

James leaned forward from his seat and put his hands up against the cold metal barrier between him and the driver. The coldness of the barrier sent a shiver down his spine. James found the chase quite exciting. The police car slowed down. Ahead of them, about 100 metres, the black Vauxhall stopped outside a warehouse. The police car stopped suddenly and all three policemen got out of the car. "Wait here James, we'll be back in a moment." Said the driver as he got out. James sat in the car. Waiting. He was constantly staring at the door of the warehouse, waiting for the policemen. Another squad car arrived, about two minutes later. Two police officers got out and ran towards the entrance of the warehouse. As soon as they entered, James went back to staring at the door again. Soon all five policemen came out of the door with Hans Moleman and his drugs dealer. Hans Moleman was a very large man. He was wearing a black leather trench coat and sunglasses. His drugs dealer wore a blue t-shirt and a pair of navy blue jeans. Both men were put in the other squad car. "We got em' Jamie!" One officer said, as he approached the car. The officer drove me home and the two criminals were tried and put in prison. THE END By Alex Selby - 1 - Alex Selby ...read more.