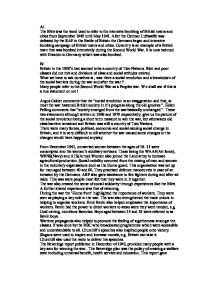 A/. The Blitz was the word used to refer to the intensive bombing of British towns and cities from September 1940 until May 1941. After the German Luftwaffe was defeated by the RAF in the Battle of Britain the Germans began and intensive bombing campaign of British towns and cities. Coventry is an example of a British town that was bombed intensively during the Second World War. It is now twinned with Dresden in Germany which was also bombed. B/. Britain in the 1930's had seemed to be a country of Two Nations. Rich and poor classes did not mix and divisions of class and social attitudes existed. What we have to ask ourselves is , was there a social revolution and a breakdown of the social barriers during the war and after the war ? Many people refer to the Second World War as a Peoples war. W e shall see if this is a true statement or not ! Angus Calder comments that the "social revolution is an exaggeration and that, at most the war hastened British society in it's progress along the old grooves ". Helen Pelling comments that "society emerged from the war basically unchanged ". These two statements although written in 1969 and 1970 respectively, give us the picture of the social revolution being a short term measure to win the war, but afterwards old class barriers remained and Britain was still a country of Two Nations. ...read more.

This report gave people something to fight for after the war. People were looking for a light at the end of the tunnel so to speak. This report would give them this. People did not want to return to the 1930's where depression and the failure of appeasement was at the fore front of peoples minds. Greater government control existed during the war. The Emergency powers act of May 1940 gave the authorities the power to o whatever is needed to win the war. An example of this is rationing, where meat, butter and cheese were rationed. An acceptance of this policy called for it to be extended after the war. This was again linked to the popularity of the Beveridge plan. Evacuation was the policy of transferring city children to rural homes because of the bombing of British town and cities. Some middle and upper class families in the countryside were shocked by the deprivation of evacuee children. Many children were barely clothed and did arouse the feelings of upper class families who thought that the children and their families deserved a better standard of living after the war. The Beveridge plan was again a key point in increasing the poor's standard of living. Americanisation broke down moral codes which had existed in Britain before the war. ...read more.

Parents were still of the old fashioned viewpoint that affairs were wrong and that if you were unmarried then it was immoral and unjust. The divorce rate increased, as did the birth rate. Prostitution was also seen as a way of making money and getting more rations. Single families increased also after the war. This was partly due to the death rates during the war and because of the American servicemen returning home to their wives and children. Women however gained self-confidence and this carried over after the war. Women during the war worked on the land (Land army). Agricultural production had to be maintained. The WAAF (Women's air force), WRNS (Navy) and ATS (army) were also set up for women aged between 18 and 31. Although these services were involved with the war effort, no fighting was partaken by the women's auxiliary services. They were mostly used for communications and backroom duties. I would say that there was a long-term sexual change with women gaining confidence. There was also a short-term social change with women moving into work during the war. It is also true to say that without women being involved on the Home front the war may not have been won. There was not however a long terms social change. Women were compelled to return home after the war. Women however learned that they were capable of going out into the workplace and providing for themselves. ...read more.