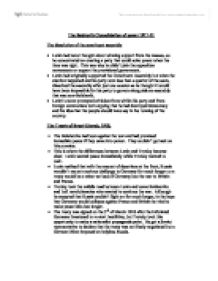 The Bolshevik Consolidation of power 1917-21.

The Bolshevik Consolidation of power 1917-21 The dissolution of the constituent assembly * Lenin had never thought about winning support from the masses, so he concentrated on creating a party that could seize power when the time was right. This was why he didn't join the opposition movements or support the provisional government. * Lenin had originally supported the Constituent Assembly but when the election happened and his party won less than a quarter of the seats, dissolved the assembly after just one session as he thought it would have been impossible for his party to govern along side an assembly that was non-Bolshevik. * Lenin's move prompted criticism from within his party and from foreign communists both arguing that he had destroyed democracy and the idea that the people should have say in the running of the country. The Treaty of Brest-Litovsk, 1918. * The Bolsheviks had been against the war and had promised immediate peace if they came into power. They couldn't go back on this promise. * This is where the differences between Lenin and Trotsky become clear. Lenin wanted peace immediately while Trotsky wanted to wait. * Lenin realised that with the amount of desertions at the front, Russia wouldn't mount a serious challenge to Germany for much longer so a treaty would be a minor set back if Germany lost the war to Britain and France. ...read more.

* But it wasn't just that the Bolsheviks were communist. They had declared that they had no intention of paying back the debt owed by the old Tsarist regime. * But the truth was, the interventionists couldn't handle another war yet not just after the 4 year struggle with Germany. * However the foreign inventions were never a serious threat to the Bolsheviks, there attempted to cooperate with the Whites were half-hearted and had no effect anyway. * So the Bolsheviks used their withdrawal as propaganda, portraying themselves as the saviour of the nation from foreign conquest. The Effects of the Civil War * The Bolshevik victory in the civil war encouraged them to try and spread the revolution to Poland by marching the Red Army in hoping that Polish workers would rise up. * However it was seen as an invasion and the Bolsheviks were forced back. * This showed Lenin that the world wasn't ready for a world revolution. So he softened his foreign policy with the aim to avoid conflict with Europe but comintern would continue to call for the international revolution. * The civil war also shaped how the communist party would rule in years to come. As the communist party had learned how to rule during a war, it had made them more willing to use force to impose themselves. ...read more.

3. Freedom of assembly 4. Rights for trade unions and release of imprisoned trade unionists. 5. Ending of the right of Communists to be the only permitted socialist political party. 6. The release of left wing political prisoners 7. Ending of special food rations for Communist party members. 8. Freedom for individual to bring food from the country in the towns without confiscation 9. Withdrawal of political commissars from factories. 10. Ending of the Communist party monopoly of the Press. * The government's chief concern was the source of the demands as the workers and sailors of Kronstadt had supported the Bolsheviks. * The Bolshevik press tried to make the Kronstadt protestors seem like white agents but really they were loyal socialists who felt betrayed by Lenin's government. * Scared by their increasing demands and numbers, Trotsky ordered the red army to crush them. * When the last ultimatum was rejects by the protestors, 60,000 Red troops stormed Kronstadt. The workers/Sailor fought back savagely before they were overcome. * Leaders who escaped were hunted down and executed. Lenin justified this by saying the rising was the work of the bourgeois enemies of the October Revolution. * Lenin had learned something however when decided to lessen the rigours of War Communism in order to avoid another rising. * This was the prelude to the introduction of the NEP, designed to reduce famine and opposition to the party. ...read more.