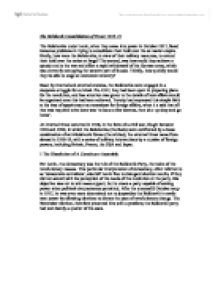 The Bolshevik Consolidation of Power 1918-21.

The Bolshevik Consolidation of Power 1918-21 The Bolsheviks under Lenin, when they came into power in October 1917, faced immense problems in trying to consolidate their hold over the ex-tsarist empire. Firstly, how were the Bolsheviks, in view of their military resources, to extend their hold over the nation at large? The second, was how could they achieve a speedy end to the war and effect a rapid withdrawal of the German army, which was currently occupying the western part of Russia. Thirdly, how quickly would they be able to stage an economic recovery? Beset by internal and external enemies, the Bolsheviks were engaged in a desperate struggle for survival. Pre-1917, they had been spent in preparing plans for the revolution, and less attention was given to the details of how affairs would be organised once this had been achieved. Trotsky had expressed this simple faith at his time of appointment as commissar for foreign affairs, when h e said that all that was required to be done was 'to issue a few decrees, then shut up shop and go home'. An internal threat occurred in 1918, in the form of a civil war, fought between 1918 and 1920, in which the Bolsheviks (the Reds) were confronted by a loose combination of anti-Bolshevik forces (the whites); the external threat came from abroad in 1918-19, with a series of military interventions by a number of foreign powers, including Britain, France, the USA and Japan. 1 The Dissolution of A Constituent Assembly For Lenin, true democracy was the rule of the Bolshevik Party, the voice of the revolutionary masses. This particular interpretation of democracy, often referred to as 'democratic centralism', also left Lenin free to disregard election results, if they did not accord with his perception of the needs of the revolution or the party. His objective was not to win mass support, but to create a party capable of seizing power when political circumstances permitted. ...read more.

In addition to the problems of a fractured transport system, Lenin's government was faced with the loss of Russia's main wheat-supply area., the Ukraine. By June 1918, the workforce in Petrograd had shrunk by 60 per cent, and the overall population had declined from three to two millions. The Bolshevik boast that October 1917 had established worker-control of Russian industry, meant little now that the workers were deserting the industry. These dire circumstances encouraged open challenges from both right and left. Lenin only narrowly escaped two SR attempts on his life. In their desperation at being denied any say in government, the SRs, despite their deep ideological differences with the Whites, joined them in common cause against Lenin's Reds in the Civil War. A contingent of 40,000 Czechoslovakian troops who had volunteered to fight on the side of the Russian troops in the First World War as a means of gaining independence from Austria-Hungary, found themselves isolated after the Treaty of Brest-Litovsk. They formed themselves into the Czech Legion and decided to make a long journey eastward to Vladivostock. Their aim was to eventually rejoin the allies on the western front in the hope of winning international support for the formation of an independent Czechoslovakian state. Local Soviets began to challenge the Czech Legion and fierce fighting accompanied its progress along the Trans Siberian railway. The SRs organised a number of uprisings in Central Russia and established an anti-Bolshevik Volga 'Republic' at Samara. In Siberia, the presence of a Czech Legion encouraged the formation of a White army under Admiral Kolchak, the self-proclaimed 'supreme ruler of Russia'. The criss-cross of political, regional and national loyalties inside Russia, together with the added complication of foreign interventions, made the Civil War a complex affair. It was because the Bolsheviks were largely successful in their desperate fight to maintain control of the railway lines that they were able to keep themselves supplied, while denying the Whites the same benefit. ...read more.

Although some ex-Tsarists held high positions in the army they had to answer to the Bolsheviks who were commissars. The death penalty was enforced for deserters. Soldiers' committees and the practice of electing officers was abandoned. Conscription was introduced by the Bolsheviks. The red army was still not as good as European armies however, mainly due to their lack of finance. The Red Army maintained control over the railways; there were a lot of conflicts between reds and whites here. Stalin and Trotsky had a major dispute, for the first time, and began to question his authority, proceeding (his triumphant success in) the Civil War. The majority of Bolsheviks knew that Trotsky was responsible for the success in the War. Despite the success of the Bolsheviks in the Civil War, there was still varying degrees of political opposition left. There was a development of opposition to war communism within the party itself. Workers' opposition groups began to encourage workers in Petrograd to strike, and the peasants wanted more control and freedom. Essentially, they wanted to be better off under the Bolsheviks than under the Tsarist regime. The Kronstadt Rising 1921 The workers set up a committee and demanded new elections, freedom of speech and press, assembly, trade unions, more political parties, the release of left-wing prisoners, the end of food rations, the removal of commissars from factories, and the allowance of food transfers. They wanted collective human rights. The fact that the people who were revolting against communism were the very people who founded it, meant that Trotsky had to sit up and take note. Trotsky ordered 60,000 red troops to storm the base, where ruthless fighting took place, and the workers and soldiers eventually surrendered; this marked the height of the political unrest. The leaders of the demonstration were said to be Whites (whether this was true or not is unclear), and they were executed. Lenin decided that it was time to be more lenient of war communism ideals. ...read more.