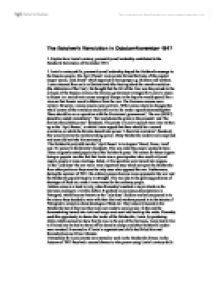 The Bolshevik Revolution In October-November 1917

The Bolshevik Revolution In October-November 1917 1. Explain how Lenin's oratory, personality and leadership contributed to the Bolshevik Revolution of November 1917. 1. Lenin's oratory skills, personality and leadership shaped the Bolshevik message to the Russian people. His April Theses' main points formed the basis of the popular slogan 'peace, land, bread' which appealed to key groups e.g. Soldiers and workers. Lenin returned from exile in Switzerland after hearing about the march revolution (the abdication of the Tsar). He thought that the fall of the Tsar was the prelude to the collapse of the Russian armies, the German government arranged for Lenin to return to Russia in a sealed train across occupied Europe in the hope he would spread like a virus so that Russia would withdraw from the war. The Germans reasons were miltary. However, Lenins reasons were political. With Lenins return he changed the whole course of the revolution and on his arrival he made a speech demanding that 'there should be no co-operation with the Provisional government', 'the war (WW1) should be ended immediately', 'the land should be given to the peasants' and 'the Soviets should take power' (handout). The points in Lenin's speech were later written up as the 'April theses', in which Lenin argued that there should be a second revolution in which the Soviets should take power 'a Socialist revolution' (handout), this would involve the workers taking power. Many Bolsheviks leaders were surprised and some did not take him seriously. The Bolshevik party did turn his 'April theses' in to slogans 'Bread, Peace, Land' and 'All power to the Soviets' (handout). This was what the people wanted to hear. These slogans boosted popularity of the Bolshevik party. ...read more.

"He is not one of the gentle folk, he is one of us, they would say"' (The times) increasing the Bolsheviks popularity. Lenin saw good talent in people and one of them was Trotsky. Even though Bolsheviks did not trust him as he used to be a Menshevik he played a major part in organising the Bolshevik take-over in October-November 1917. So with out Lenin the Bolsheviks would of never of come to power as Trotsky would of been discarded. The Bolsheviks would not of had the popularity he brought them or his determination to push though the take-over of the Provisional Government. Even tough it was luck that Lenin's Red Guard got rifles when Kronilov decided to challenge Kerensky and the war which was going bad for Kerensky. This primed Russia for the Bolshevik Revolution. Also with out the unpopularity of the Provisional Government the Bolsheviks would not of had the support of the key groups e.g. The workers and mainly the armed forces which meant Kerensky could not have an armed resistance against Lenin. It was Lenin though who got the support of the army with the policy of stopping the war with Germany 'Peace' (April Theses). All these things brought about Lenin's Bolshevik revolution. Which makes him the main reason for the Bolshevik Revolution. Lenin's main difference was that he pushed his party to apposed the support of the Provisional Government and with out Lenin the Bolshevik most probably would have adopted the Menshevik position in support of the Provisional Government. It would also be wrong to say that Lenin conducted in 1917 the takeover as a flawless exhibition of political manoeuvring. He miscalculated badly during the 'July days' so it was more luck, determination and the help of Trotsky which brought Lenin in to power in November 1917. ...read more.