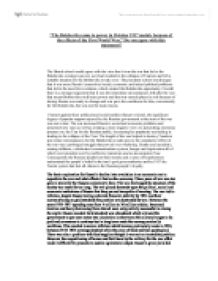 The Bolsheviks came to power in October 1917 mainly because of the effects of the First World War.

"The Bolsheviks came to power in October 1917 mainly because of the effects of the First World War." Do you agree with this statement? The liberal school would agree with the view that it was the war that led to the Bolsheviks coming to power; as it had resulted in the collapse of Tsarism and left a suitable situation for the Bolsheviks to take over. The pessimist school would argue that it was more Russia's unresolved social, economic and indeed political problems that led to the need for revolution, which created the Bolsheviks opportunity. Overall there is a stronger argument that it was the immediate circumstances left after the war that meant Bolsheviks could seize power and that war merely played a role because of timing, Russia was ready to change and war gave the conditions for this, conveniently for the Bolsheviks, but was not the main reason. Framed against these political and social realities that pre-existed, the significant degree of popular support enjoyed by the Russian government at the start of the war was not to last. The war increased Russia's social and economic problems and presented new ones as well as creating a more negative view of, and putting enormous pressure on, the Tsar for the Russian public, decreasing his popularity and aiding in leading to the collapse of the Tsar. The length of the war helped to destroy Tsardom and create circumstances for the Bolsheviks to take power, the cumulative effect of the war was a prolonged struggle that proved over whelming. ...read more.

Right through his reign, Tsar Nicholas II had gradually lost touch with his people. On his orders, Cossack guards brutally repressed the 1905 revolution, named 'Bloody Sunday', and the 1912 Lena goldfields protests. The Moscow okhrana cited the Lena goldfield incident as the main reason 'the people can be heard speaking of the government in the sharpest and most unbridled tone'. The people of Russia realized their tsar was not the giving and compassionate leader they thought he was but that he was ruthless and was only concerned with keeping order. The Tsar's tyranny and autocratic rulings were most clearly seen in his dealing with calls to reform, and here is where unrest began. In 1905 he was forced, reluctantly, to introduce a limited constitution, a parliament and legalise trade unions. Liberals then unsuccessfully demanded more. However, over the following ten years he tried to reverse these concessions. The Fundamental Laws immediately rebuffed the October Manifesto and Order No. 1 gave the Tsar power of refusal over the Duma, itself obstructed by Tsarist conservatives. Furthermore this led to revolutionary parties like the Bolsheviks growing influence from 1905 to 1917. The economic instability was worsened by the militaries needs, as they were prioritised and put in front of things such as the railway improvement creating problems with migration. The economy was growing, but was in no way equal to the other European nations such as Britain, France and Germany. Living conditions were still poor. ...read more.

alliance of left socialist groups which would form a socialist coalition government to prepare for fundamental social reform and peace negotiations by a socialist-friendly Constituent Assembly; and a middle group of independent-minded leaders whose views on the development of the revolution fluctuated in response to their reading of existing conditions. By summer of 1917 it seemed the government was no longer in control of events. There was spreading of the soviets, workers controlled factories, widespread seizure of land by peasants and the creation of breakaway national minority governments. The July uprising ended in an apparent defeat for the Bolsheviks. Lenin was forced into hiding, numerous Bolshevik leaders were jailed, and efforts to form a united left-socialist front were temporarily ended. Still, in light of the success of the Bolsheviks in the October Revolution, perhaps the main significance of the July uprising was that it reflected the great popular attraction for the Bolshevik revolutionary program, as well as the party's strong links to Petrograd's lower classes, links that would prove valuable over the long term. The failure of the provisional government was a sufficient cause of the Bolsheviks rise to power, it allowed them to manipulate the situation and take over. The war had been a necessary factor but the failure of the provisional government was entirely essential. The background causes that lead to the October revolution and the fall of the Tsar, set a path for the failure of the Provisional Government because of the situation they inherited from the Tsar and ultimately meant the Bolsheviks could rise to power ...read more.