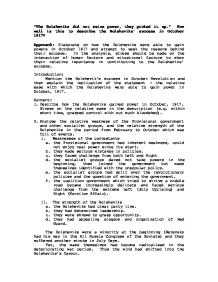 &quot;The Bolsheviks did not seize power, they picked it up.&quot; How well is this to describe the Bolsheviks' success in October 1917?

2. Analyse the relative weakness of the Provisional government and other socialist groups, and the relative strength of the Bolsheviks in the period from February to October which was full of events. i. Weaknesses of the contestants a. the Provisional government had inherent weakness, could not enjoy real power since its start. b. they made serious mistakes in policies. c. they faced challenge from both Left and Right d. the socialist groups dared not take powers in the beginning, then joined the government but made themselves identified with the unpopular policy. ...read more.

the Bolsheviks had clear party line. b. they had determined leadership. c. they were shrewd to grasp opportunity. d. they had appealing slogans and organization of Red Guard. The Bolsheviks were a minority at the beginning (Kerensky had his way in the All Russia Congress of the Soviets) and they suffered another stroke in July Days. Yet, the mass themselves had become radicalised in the deteriorating war period. Thus the wind had shifted into the Bolsheviks's favour. Final Analysis: Did the Bolsheviks pick up the power? (Situational factors predominant) Or did the Bolsheviks make their own efforts to get to power? (Human factors more important). ?? ...read more.