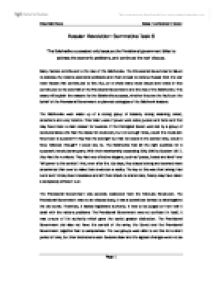 'The Bolsheviks succeeded only because the Provisional government failed to address the economic problems, and continued the war' discuss.

Russian Revolution: Summative Task 6 'The Bolsheviks succeeded only because the Provisional government failed to address the economic problems, and continued the war' discuss. Many factors contributed to the rise of the Bolsheviks. The Provisional Governments failure to address the nations economic problems and their refusal to remove Russia from the war were factors that contributed to this. But, on a whole many more issues and twists in fate contributed to the downfall of the Provisional Government and the rise of the Bolsheviks. This essay will explain the reasons for the Bolsheviks success, whether they are the faults on the behalf of the Provisional Government or planned strategies of the Bolshevik leaders. The Bolsheviks were made up of a strong group of leaders, strong meaning; smart, determine and very forceful. Their main uses of power were order, justice and force and that may have been a main reason for success. If the Petrograd Soviet were led by a group of revolutionaries who had the ideas for revolution, but not enough force, would the revolution have been a success? If they had the strength but had not acted at the correct time, would it have followed through? I would say no. The Bolsheviks had all the right qualities for a successful revolutionary party. With their membership exceeding 200, 000 by October 1917, they had the numbers. They had very effective slogans, such as "peace, bread and land" and "all power to the soviets". And, even after the July days, they stayed strong and seemed more determined than ever to make their revolution a reality. The key to this was their timing. Had Lenin and Trotsky been indecisive and left their attack to a later date, history may have taken a completely different turn. The Provisional Government was severely weakened from the February Revolution. The Provisional Government was not an elected body, it was a committee formed to rebel against the old duma. ...read more.