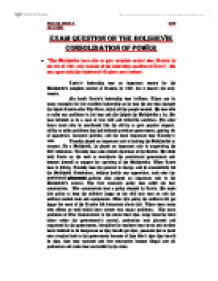 &quot;The Bolsheviks were able to gain complete control over Russia by the end of 1921 only because of the leadership qualities of Lenin&quot;. Do you agree with this statement? Explain your answer.

Exam question on the Bolshevik consolidation of power * "The Bolsheviks were able to gain complete control over Russia by the end of 1921 only because of the leadership qualities of Lenin". Do you agree with this statement? Explain your answer. Lenin's leadership was an important reason for the Bolshevik's complete control of Russia by 1921 but it wasn't the only reason. No doubt Lenin's leadership was brilliant. There can be many examples for his excellent leadership as he was the one who changed the whole Russia after The Tsar, which all the people wanted. He was able to solve any problems in his way and this helped the Bolsheviks a lot. He was believed to be a man of iron will and inflexible ambition. Yet other factor must also be considered like the ability to gain popular support, ability to solve problems that had defeated previous government, getting rid of opposition, economic policies, and the most important was Trotsky's role. Trotsky played an important role in leading the Bolsheviks to success. ...read more.

After this entire discontentment all over the country, Lenin decided to introduce another policy. This policy was called NEP (the New Economic Policy). In this policy, there were many changes. Peasants were allowed to sell some of the grains that they grew and this gave a reason to the peasant to grow more food and as a result Russia would get back to good status. Small industries were privatised, by which I mean that the factories were given back to their owners. All of this changed the whole country. Although this was leading towards capitalism and many people disagreed with this, Lenin explained them that if we do this temporarily to get Russia back then we can stop this policy. After the sadness of War Communism, this new policy gave a happy jolt to the Russians which helped them a lot. Another reason for the Bolshevik's success was that they were very good at getting rid of their opposition. Couple of examples for that are when the Bolsheviks closed down the constituent assembly. ...read more.

He made many slogans, did a lot of propaganda and because of this he got the support of the peasants. 80% of Russia was filled with peasants and by getting the support of the peasants; it was like almost the whole of Russia was on your side. He also made many decrees to keep the Russian people happy. One of his important slogans was "Peace, Bread, Land and all power to the Soviets." It was said in a very strong manner which made all the peasants and workers to believe in this very strongly. This gave Lenin a lot of popularity. He made propaganda posters which made the foreign armies look disgusting. All because of this Lenin had a lot of popularity. This helped then to the success of the Bolsheviks. All of these reasons also helped Bolsheviks to success so Lenin's leadership qualities were not the only thing that led them to success. No doubt Lenin's leadership was good but it wasn't good enough to lead Bolsheviks alone. Al this helped them very much and all because of that Bolsheviks were led to success. PRATIK MEHTA H/W 19/11/2003 ...read more.