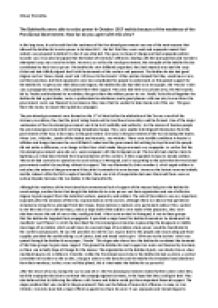 The Bolsheviks were able to seize power in October 1917 mainly because of the weakness of the Provisional Government. How far do you agree with this view?

ï»¿Oliver Perretta The Bolsheviks were able to seize power in October 1917 mainly because of the weakness of the Provisional Government. How far do you agree with this view? In the long term, it can be said that the weakness of the Provisional government was one of the main reasons that allowed the Bolsheviks to seize power in October 1917, the fact that they were weak and unpopular meant that nobody was prepared to defend it when it was attacked. They gave no hope of change and had unpopular policies towards war; it can also be argued that the failure of Kerensky’s offensive, dealing with the land question and Kornilov’s attempted coup was crucial to its fate. However, as well as the weak government, the strengths of the Bolsheviks also contributed to their rise to power. The Bolsheviks were brilliantly organised, they had masterly executed the coup d’état and had skilfully aligned itself with the demands of the workers and peasants. The Bolsheviks also had good slogans such as ‘Peace, Bread, Land’ and ‘All Power to the Soviets’. Other parties claimed that they would never carry out their promises, but their arguments were too complicated for people to understand, so this gained support for the Bolsheviks. ...read more.

They also believed that by following the alliance with France and Britain would get them important financial support. The major problem that was crucial to the government?s fate was the failure of Kerensky?s offensive. In June, as War Minister, Kerensky launched a major offensive against Germans however it was unpopular and morale began to collapse. The Provisional Government set up ?death squads? to execute deserters. This made things worse, by October 1917; 2 million soldiers were deserting, going home, killing the landlords, and taking land. This decision to continue the war weakened the capacity of the Provisional government to consolidate its position and deal with other problems that it faced. It also showed the lack of concern that the Provisional government had for those suffering in hardship of war, rank and file soldiers, the industrial workers and the peasantry which helped the Bolsheviks gain support. As well as this Kerensky delayed the summoning of the Constituent assemble which lost them valuable support from the peasantry. It was clear that the provisional government were in no position to implement many of the reforms that the industrial workers and peasantry wanted such as the Land question, and as a result of this, it was seen that direct action was the only way forward. ...read more.

They only lasted for 8 months, and from the start the Provisional Government had lacked both support and authority and its attempts to pursue a moderate line were perhaps undermined by the lack of middle class in Russia, but it could have done more to gain support from the conservatives or even the moderate left. Instead it alienated both groups and as a result was left isolated. A crucial factor was perhaps the decision to continue the war as it stretched the strength of the government which were not in a strong position in the first place. This allowed the Bolsheviks to use their strengths and take advantage of the situation; they were well organised and had a strong leader who was financed by German money to pay for their campaigns. They had their own private army which gave them military power and with this they had built up an efficient party organisation with an effective propaganda machine which allowed them to gain support. Although there was a setback in support due to the failure of the ?July Days?, In August the Kornilov coup revived Bolshevik fortunes, whilst at the same time undermining the position of the other socialist groups. In result, due to the weakness of the Provisional government and strengths of the Bolsheviks, when Lenin moved to take over, the government could do nothing to stop him allowing the Bolsheviks to seize power. ...read more.