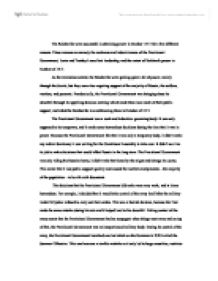 The Bolsheviks were successful in obtaining power in October 1917 for a few different reasons. Discuss

However, this put the spotlight on the Bolsheviks, who were regarded as the saviors of the revolution; incidentally, Kerensky's reputation was ruined and officers lost the loyalty of their soldiers. Another major factor in Bolshevik success was the extent of power that the Bolsheviks had at the time of the revolution. The Bolsheviks were in total control of the infrastructure, through the soviets, which meant that they controlled transportation, food, supplies, communication (in the form of telegraphs), and the media (newspapers). Bolshevik popularity was also on a high, which mean that the public was behind the Bolsheviks. The Provisional Government was also soon becoming helpless, and it was bringing about its own downfall through the horrendous decisions it was making causing a loss of public support. These factors helped the Bolsheviks obtain power in October 1917. The Bolsheviks also had an edge over the Provisional Government in the fact that they had military power in the form of the Red Guard. The Provisional Government neither had its own army nor the support of the Russian army, causing them to be defenseless when the Bolsheviks attacked. Military power allowed the Bolsheviks to take over key targets by force. For example, when the Constituent Assembly was opened, and the votes were in, the Bolsheviks had lost. ...read more.

Such an advantage helped the Bolsheviks reach their high levels of popularity and therefore seize power in Russia. The Bolshevik ideals were in tune with what the workers, soldiers and peasants wanted. Lenin's famous slogan of "Peace, Land and Bread" promised to the lower classes of Russia just what they wanted. The Bolsheviks were the only party that opposed the continuation of the war, and that also helped raise their popularity. Right from the start, Lenin made sure that it was clear he was opposed to the Provisional Government and that its destruction was vital to the betterment of Russia. These ideals also contributed to the high levels of Bolshevik popularity, and therefore increased the Bolsheviks' public support. By October of 1917, the Bolsheviks had stormed the Winter Palace, and banished the Provisional Government. They had been successful in obtaining power. The Bolsheviks were able to seize this power because of the Provisional Government's weak and indecisive nature, and their atrocious decision-making. They were also able to take over because of the extent of power that they had at the time of the revolution and because of Lenin and Trotsky's great leadership skills. ...read more.