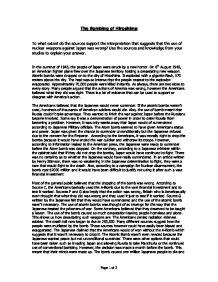 The Bombing of Hiroshima

The Bombing of Hiroshima To what extent do the sources support the interpretation that suggests that the use of nuclear weapons against Japan was wrong? Use the sources and knowledge from your studies to explain your answer. In the summer of 1945, the people of Japan were struck by a new horror. On 6th August 1945, an American fighter plane flew over the Japanese territory holding a devastating new weapon. Atomic bombs were dropped on to the city of Hiroshima. It exploded with a gigantic flash, 570 meters above the city. The heat was so intense that the people nearest to the explosion evaporated. Approximately 70,000 people were killed instantly. As always, there are two sides to every story. Many people argued that the actions of America was wrong, however the Americans believed what they did was right. There is a lot of evidence that can be used to support or disagree with America's action. The Americans believed that the Japanese would never surrender. If the atomic bombs weren't used, hundreds of thousands of American soldiers would die. ...read more.

Also, according to a campaign for Nuclear disarmament, the bomb cost $2000 million and it would have been difficult to justify not using it after such a vast financial investment. Most of the general public believed that the dropping of the bomb was wrong. According to Source C, the Americans basically used the A-Bomb due to the vast financial investment and to test it worked. Sources F and G also imply that the action was wrong, Britain who is Americas ally even thought that what they did was wrong and they used it just to test if it worked. Source G written by the Japanese felt that they would have surrendered and the use of the atomic bomb wasn't necessary. The use of atomic bombs was thought of as revenge for the way that the Japanese treated the prisoners of war. Some Americans believed that they deserved to be taught a lesson. The use of the bomb caused so much devastation leaving people homeless and alone. This shows us how devastating such weapons are. ...read more.

The Japanese surrendered on August 10th when their army was near a revolt. Many civilians would have revolted because they felt it was better to continue fighting than give up. In my opinion, I felt that the actions the Americans took were morally wrong. I don't think that the killing of thousands of innocent people could be justified, people were killed unlawfully. Nuclear weapons weren't needed because it caused even more death and destruction after it was dropped because of the radiation. I feel that the bomb was dropped mainly to convey America's power to the world and to attempt to deter Russia from taking advantage. Also, many of the Japanese people said that they were going to surrender before the Atom bomb was even dropped. I think the bomb was dropped in order to test if it worked and to use it in any way possible because it did cost a lot of money, and for the President of the United States to say that the bombing was 'the best day in history' makes me feel that he was just testing out the bombs and not using it to force the Japanese to surrender. ?? ?? ?? ?? Page 1 of 2 ...read more.