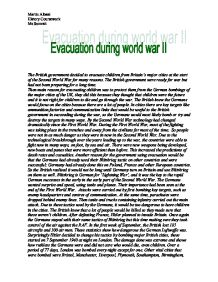 The British government decided to evacuate children from Britain's major cities at the start of the Second World War for many reasons. The British government were ready for war but had not been preparing for a long time. Then main reason for evacuating children was to protect them from the German bombings of the major cities of the UK, they did this because they thought that children were the future and it is not right for children to die and go through the war. The British knew the Germans would focus on the cities because there are a lot of people. In cities there are key targets like ammunition factories and communication links that would be useful to the British government in succeeding during the war, so the Germans would most likely bomb or try and destroy the targets in many ways. ...read more.

Blitzkrieg is German for 'Lightning War', and it was the key to the rapid German successes in the early in the early part of the Second World War. The Germans wanted surprise and speed, using tanks and planes. Their importance had been seen at the end of the First World War. Attacks were carried out by first bombing key targets, such as enemy headquarters and centres of communication. At the same time, parachutes were dropped behind enemy lines. Then tanks and trucks containing infantry carried out the main attack. Due to these tactics used by the Germans, it would be too dangerous to have children in the cities. The British knew that a lot of people would be killed so they made sure that these weren't children. After defeating France, Hitler planned to invade Britain. Once again the Germans stayed with their same tactics of Blitzkrieg but this time making sure they took control of the air against the RAF. ...read more.

By the time the Blitz ended in the summer of 1941 about 43,000 people had been killed and 2 million were homeless. These figures would have been higher if children were not evacuated. In the First World War, German air raids killed 1,417 people. By the 1930's, bombs were much bigger and the British government planners expected far greater casualties. They estimated that 600,000 people would be killed in a few days. They also expected poison gas to be used which would have been used to great effect. In conclusion as you can see from the above reasons on why the British government decided to evacuate the children to the countryside that it was crucial for them to do that because of how ruthless the Germans were. In my opinion I think the most important reason has to be that children are the future and that the Germans would have most definitely killed a lot of people and most of them would have been children if they weren't evacuated. Martin Albazi History Coursework Ms Somrah ...read more.