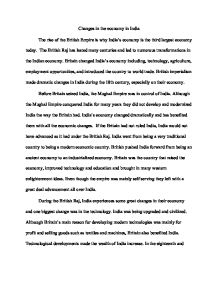 The British Raj has lasted many centuries and led to numerous transformations in the Indian economy. Britain changed Indias economy including, technology, agriculture, employment opportunities, and introduced the country to world trade. British imperia

Changes in the economy in India The rise of the British Empire is why India's economy is the third largest economy today. The British Raj has lasted many centuries and led to numerous transformations in the Indian economy. Britain changed India's economy including, technology, agriculture, employment opportunities, and introduced the country to world trade. British imperialism made dramatic changes in India during the 18th century, especially on their economy. Before Britain seized India, the Mughal Empire was in control of India. Although the Mughal Empire conquered India for many years they did not develop and modernized India the way the Britain had. India's economy changed dramatically and has benefited them with all the economic changes. If the Britain had not ruled India, India would not have advanced as it had under the British Raj. India went from being a very traditional country to being a modern economic country. British pushed India forward from being an ancient economy to an industrialized economy. Britain was the country that raised the economy, improved technology and education and brought in many western enlightenment ideas. Even though the empire was mainly self serving they left with a great deal advancement all over India. During the British Raj, India experiences some great changes in their economy and one biggest change was in the technology. ...read more.

Before the British rule there were a lot of ups and downs in India's agriculture. Britain came and changed India's agricultural system. Besides just producing cash crops for the family, the Britain showed them how to produce crops for other to gain profit. Britain changed India's thing from being ancient to thinking like business men. The Britain helped advance farming techniques and helped Indians with irrigation. They helped them grow many crops that would bring them more income and have food grains exported to markets. Britain also helped improve productivity to produce things like cotton, tea, coffee, and many other cash crops. Scholor Charlesworth states that cash crops brought many benefits. He states that India became one of the biggest producers of things such as cotton, rice, opium, wheat, and tea (Charlesworth 24). Having a boost in the agriculture was a very good economic change that became beneficial for the people in India. Farming methods improved tremendously when the Britain built canals in Inida. By building canals the agriculture was flourishing. Canals provided as much water need to water the fields. The British in many ways increased employment opportunities for many people in India which increased the economics. According to Ambirajan, employment opportunities were the greatest attraction for the Indians (Ambirajan 52). Agriculture opened job opportunities for many farmers. ...read more.

It would also not have been too modernized. India would not have new built schools, railways, and factories as it had under British Raj. India's education, though and way of life would have still been ancient and native. Anything and everything that the British did was done to help themselves and to make a lot of profit but India had many benefits in the long run. India would not have known too much of education and English language. The British introduced English language to India, the common language which is shared with the rest of the world. The British took India and transformed it into a new generation where India's economy is also modernized. British made many changes to India over the 18th century. Many change has to do with modernizing India's economic system. Constructive changes such as technology, agriculture, employment opportunities, and introduced the country to world trade made India's economy very modern. India was introduced to new developments such as railways, roads, canals, schools and universities, and machines and companies. Many of these developments created jobs for native Indians. The agriculture system grew by improving productivity of cash crops which eventually led to India's world trade. All of the changes that were made to India by the Britain had huge effects on India. With some of the changes India's economy increased dramatically and had made lifelong changes. If it wasn't for Britain, India would not have been how it is today. ?? ?? ?? ?? ...read more.