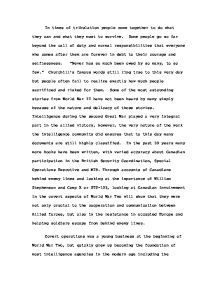 The British Security Coordination and Canadian Involvement in Clandestine Activities

In times of tribulation people come together to do what they can and what they must to survive. Some people go so far beyond the call of duty and normal responsibilities that everyone who comes after them are forever in debt to their courage and selflessness. "Never has so much been owed by so many, to so few." Churchill's famous words still ring true to this very day but people often fail to realize exactly how much people sacrificed and risked for them. Some of the most astounding stories from World War II have not been heard by many simply because of the nature and delicacy of those stories. Intelligence during the second Great War played a very integral part in the allied victory, however, the very nature of the work the intelligence community did ensures that to this day many documents are still highly classified. In the past 30 years many more books have been written, with varied accuracy about Canadian participation in the British Security Coordination, Special Operations Executive and MI9. Through accounts of Canadians behind enemy lines and looking at the importance of William Stephenson and Camp X or STS-103, looking at Canadian involvement in the covert aspects of World War Two will show that they were not only crucial to the cooperation and communication between Allied forces, but also in the resistance in occupied Europe and helping soldiers escape from behind enemy lines. ...read more.

central agency on neutral soil which was a collusion of four major British intelligence departments based out of New York plus a communications-intelligence web that covered virtually all directions and a secret police force on American soil. These facts alone lent to the urgent need for secrecy as any violation of America's sovereignty, which the British Security Council surely was, would contribute nicely to the anti-war movement in the United States and help Germany's war effort. Despite these restrictions many remarkable things were achieved by Stephenson and the many men and women who worked for him. One of the more astounding stories that seems to come more out of a thrilling spy book rather than historical documents was the procurement of Vichy French Naval ciphers kept under lock and guard in the French embassy. Two of Stephenson's agents known as Cynthia and Bertrand masquerading as romantic lovers bribed a night watch man to let them into the embassy for a circumspect tryst. After gaining his trust by doing this for a few nights they slipped him a sleeping powder in his champagne and brought in a locksmith to figure out the code for the safe in the code room. The next night they again went in and knowing that the security guard was probably quite suspicious about his falling asleep had Cynthia undress for the guard's expected intrusion. After sufficiently embarrassing the guard and getting his assurance that they would not be bothered anymore, they opened the safe and passed out the naval ciphers to a waiting agent who copied them and brought them back to be replaced in the safe. ...read more.

Though Camp X was one of dozens of special agent training camps that the British had throughout the world it was undoubtedly the most important for several reasons. The men that Camp X trained were often the most successful behind enemy and there are dozens accounts of these brave people and there stories, it was an invaluable tool in the training of intelligence officers for the American O.S.S., and it was the base for the largest radio installation in North America, and a direct communication link between the British and the Americans. Through the efforts of individuals like William Stephenson and the hundreds of Canadians who voluntarily dropped behind enemy lines in the fight against the Germans, and the men and women that were organized to monitor German radio as well as pass information between the Allies, Canadians played a large role in the covert aspect of World War Two. While many Canadians do not recognize this fact, it is not because they do not want to, it is because they do not know. Many Canadians made the ultimate sacrifice for the good of others, while many more gave their utmost dedication and attention to the war that was raging so far away. The collusion between American and British interests that Stephenson managed so skillfully, despite all the restrictions placed on him helped ensure British survival during the darkest days of the war, and eventual entry into the war by the United States. From Canadian radio operators to Canadians organizing resistance they were involved in all levels of the covert aspect of World War Two. ...read more.