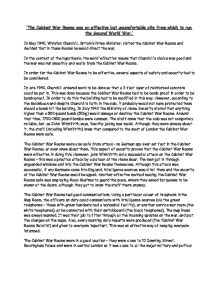 'The Cabinet War Rooms was an effective but uncomfortable site from which to run the Second World War.'

The Cabinet War Rooms had good communications. Using a particular colour of telephone in the Map Room, the officers on duty could communicate with intelligence sources (via the green telephones - those with green handsets had a 'scramble' facility), or another service war room (the white telephones), or be connected with their switchboard (the black telephones). The map Room was always manned. It was their job to filter through all the incoming updates on the war, and plot the changes on the maps. Also, every morning daily reports were produced (the 'Cabinet War Rooms Bulletin') and given to everyone important. This was an effective way of keeping everyone informed. The Cabinet War Rooms were in a good location - they were close to 10 Downing Street, Buckingham Palace and were in central London so it was close to all the major military and political bases, and the Houses of Parliament. This location added to the Cabinet War Room's effectiveness in communications. It depended on what position of job you were in if you found the Cabinet War Rooms comfortable or uncomfortable. ...read more.