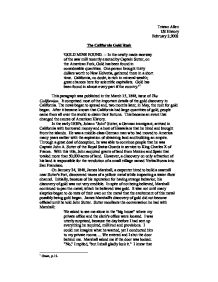 Tristan Allen US History February 3,2003 The California Gold Rush 'GOLD MINE FOUND. -- In the newly made raceway of the saw mill recently erected by Captain Sutter, on the American Fork, Gold has been found in considerable quantities. One person brought thirty dollars worth to New Helvetia, gathered there in a short time. California, no doubt, is rich in mineral wealth; great chances here for scientific capitalists. Gold has been found in almost every part if the country.'1 This paragraph was published in the March 15, 1848, issue of The Californian. It comprised most of the important details of the gold discovery in California. The news began to spread and, two months later, in May, the rush for gold began. After it became known that California had large quantities of gold, people came from all over the world to claim their fortune. This became an event that changed the course of American History. In the early 1830's, Johann "John" Sutter, a German immigrant, arrived in California with borrowed money and a host of Hawaiians that he hired and brought from the islands. He was a middle-class German man who had moved to America many years earlier with the aspiration of obtaining land and building an empire. Through a great deal of deception, he was able to convince people that he was Captain John A. ...read more.

The California Gold Rush was seen as an ideal opportunity to leave the settled east and adventure westward and expand American territory. People made numerous sacrifices to search for gold. People abandoned their houses, many left 4their jobs, and there are even reports of soldiers leaving their posts. On May 19, 1948, just days after Brannan's announcement, the first prospectors arrived at the American River from Northern California. These people, known as Forty-Eighters, were the people fortunate to be so close to Sutter's Fort during the discovery of gold there. However, everyone was not as fortunate to be in such an ideal place at the right time. People came from all over the world through challenging terrain and rough seas to get their portion of California's proclaimed riches. Many debate which was worse: the voyage to California by sea or the journey across the treacherous terrain. People who were not living in the Americas came to California by sea because it was their only option. People living in the eastern United States had the choice of travelling by land or by sea and many opted to go by sea. The severity of travelling by sea around Cape Horn (the southern tip of South America) was initially overshadowed by the prospectors' anxiety (See Figure 2). The voyage took between six and nine months and was physically demanding. ...read more.

Once people got to California, San Francisco's population boomed and the search for gold began. 8 9 Many people used the method of panning to find gold. With this method, the prospectors would put minerals they got out of the river into a pan and stir the minerals. Gold's high density would cause it to remain at the bottom of the pan. The other commonly-used pieces of mining equipment are the pick and the rocker. The rocker was used in the same way as the pan. The only difference is that the rocker was a box that rocked back and forth, with gold's density causing it not to move as freely as the lighter sand and gravel. The pick was used to get the gold that was submerged in the earth. This was the most tedious method, yet the most rewarding because the majority of gold was actually submerged in the earth. Eventually, the easily-obtained gold was all taken by prospectors, leaving gold that only be obtained through heavy machinery and expensive equipment. After this occurred, the anxiety of the California Gold Rush vanished. When the Gold Rush was over, some people had worked hard and acquired their riches, while others were not as fortunate. However, whatever the outcomes of the individuals, the California Gold Rush changed California forever and played a vital role in the westward expansion of the United States. ...read more.