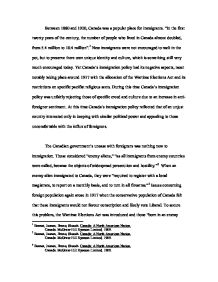 Between 1880 and 1920, Canada was a popular place for immigrants. "In the first twenty years of the century, the number of people who lived in Canada almost doubled, from 5.4 million to 10.4 million".1 New immigrants were not encouraged to melt in the pot, but to preserve there own unique identity and culture, which is something still very much encouraged today. Yet Canada's immigration policy had its negative aspects, most notably taking place around 1917 with the allocation of the Wartime Elections Act and its restrictions on specific pacifist religious sects. During this time Canada's immigration policy was unfairly rejecting those of specific creed and culture due to an increase in anti-foreigner sentiment. At this time Canada's immigration policy reflected that of an unjust country interested only in keeping with similar political power and appealing to those uncomfortable with the influx of foreigners. ...read more.

Those from foreign countries were treated as though they still lived for their prior country and had no interest for the well being of their new home. They were treated like criminals while still being innocent and these actions were more likely to separate fellow Canadians, then join them together as a country. While those immigrants from "enemy" countries suffered greatly through this time, so did three specific pacifist religious sects. The Doukhobors, the Mennonites, and the Hutterites, were persecuted for not enlisting in the military among other things. When these groups immigrated to Canada they were given "specific guarantees from the federal government permitting them to maintain the autonomy, educational freedom, and exemption from military service"5, it was easy for the government to permit these requests when they were in need of immigration. ...read more.