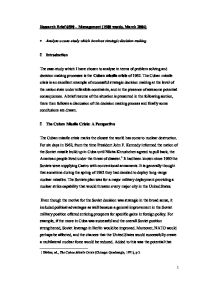 The case-study which I have chosen to analyse in terms of problem solving and decision making processes is the Cuban missile crisis of 1962.

Research Brief 6590 - Management (1500 words, March 2004) * Analyse a case-study which involves strategic decision making. * Introduction The case-study which I have chosen to analyse in terms of problem solving and decision making processes is the Cuban missile crisis of 1962. The Cuban missile crisis is an excellent example of successful strategic decision making at the level of the nation state under inflexible constraints, and in the presence of awesome potential consequences. A brief resume of the situation is presented in the following section, there then follows a discussion of the decision making process and finally some conclusions are drawn. * The Cuban Missile Crisis: A Perspective The Cuban missile crisis marks the closest the world has come to nuclear destruction. For six days in 1962, from the time President John F. Kennedy informed the nation of the Soviet missile build up in Cuba until Nikita Khrushchev agreed to pull back, the American people lived under the threat of disaster.1 It had been known since 1960 the Soviets were supplying Castro with conventional armaments. It is generally thought that sometime during the spring of 1962 they had decided to deploy long-range nuclear missiles. ...read more.

The action goal(s) may be considered as representative of the decision maker's aspiration level. 2. The decision maker engages in search activity and defines a limited number of outcomes and alternatives. His analysis proceeds from loosely defined rules of approximation. The limited alternatives defined establish a starting point for further search toward a solution. 3. Search among the limited alternatives is undertaken to find a 'satisfactory', as contrasted with an 'optimal', solution. 'Satisfactory' is defined in terms of the aspiration level or action goals.2 Therefore the first step, and indeed the most logical one, was to define the action goals, or objectives, from an American perspective. The first and foremost American objective was to have the Soviet missiles removed from Cuba. However, there were also other purposes that had to be served in the process of removing the missiles. It was essential, for example, that the world power balance remain in favour of the United States. Moreover, while the defence of the Western Hemisphere had to be preserved, it was also necessary not to alienate neutral nations who might be inclined to move into the Communist camp. ...read more.

A blockade was a middle course between inaction and attack. It was aggressive enough to signify firmness of intention but not so precipitous as an air strike and on balance, was the best choice among the available alternatives. * Conclusions Clearly in view of the objectives underlying the decision, as well as the un-quantifiable but excruciating constraints of the moment and obviously with the outcome that was achieved, a blockade was the best and correct choice made by President Kennedy and the Executive Committee. The process used to make the decision was clearly appropriate as there was little time to develop quantitative models or employ sophisticated statistical techniques. On the other hand however this could be seen as a weakness of the method, that there was no formal mathematical techniques employed. However, this is perhaps why the process used is particularly attractive as it engages both subjective thought (the list of alternatives) and some mathematical rationale (the decision matrix), without involving too much complexity. The behaviour of the decision makers was very rational in that they never lost sight of the objectives. The choice was made in the face of vast environmental pressures and very limited, incomplete information. With these factors taken into account and the outcome now known, it can be said that the decision making process was hugely effective. ...read more.