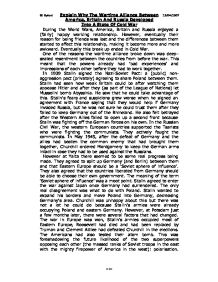 The causes of the Cold War.

During the World Wars, America, Britain and Russia enjoyed a (fairly) happy working relationship. However, eventually their reason for being friends was lost and the differences between them started to affect this relationship, making it become more and more awkward. Eventually this break up ended in Cold War. One of the reasons the wartime alliance broke down was deep-seated resentment between the countries from before the war. This meant that the powers already had 'bad experiences' and impressions of each other before they had to work together. In 1939 Stalin signed the Nazi-Soviet Pact: a (public) non-aggression pact (privately) agreeing to share Poland between them. Stalin had seen how weak Britain could be after watching them appease Hitler and after they (as part of the League of Nations) let Mussolini bomb Abyssinia. He saw that he could take advantage of this. Stalin's fears and suspicions grew worse when he signed an agreement with France saying that they would help if Germany invaded Russia, but he was not sure he could trust them after they failed to keep Germany out of the Rhineland. ...read more.

The only real disagreement was what to do with Poland. Stalin wanted to expand his borders and move Poland into Germany, decreasing Germany's area. Churchill was unhappy about this but there was not a lot he could do because Stalin's armies were already occupying Poland and eastern Germany. However, at Potsdam just a few months later, there were several factors that had changed. The war in Europe was won, Stalin's armies occupied most of Eastern Europe, Roosevelt had died and had been replaced by Truman and Clement Attlee had defeated Churchill in the elections. The Americans had also tested their atom bomb. This was foreshadowing the future likelihood of the two superpowers opposing each other (the massed ranks of Soviet troops in the east with the mighty firepower of America in the west): polarisation. Nevertheless, the allies agreed to divide Germany into zones and to claim reparations for war losses. However, the USA began to realise that it did not want a weakened Germany in Central Europe, a perfect breeding ground for communism. ...read more.

The USA emerged immeasurably more powerful from the war with Germany and Japan. It was clear that the USA could no longer sit on the sidelines in world politics. In addition, the USA was extremely concerned by the spread of communism in Eastern Europe and the Far East. The USA believed that Stalin wanted to convert the rest of the world to communism. The USA had fought the fascist ideologies of Germany, Italy and Japan, now it was prepared to fight the communist ideology of the USSR. Great Britain and France had come out of the Second World War weaker; their economies were in a worse state than the USA's and they were in a poorer position to influence world affairs. All throughout the Big Three's alliance there were underlying tensions, deep-rooted mistrust and suspicion that went back to before the wars. Furthermore, there was a big distinction between their beliefs and ideologies which emphasised this rift. This eventually bubbled to the surface, breaking the thin ice upon which their affiliation was balanced. Ed Byford Explain Why The Wartime Alliance Between 25/04/2007 America, Britain And Russia Developed Into A State Of Cold War ~1~ ...read more.