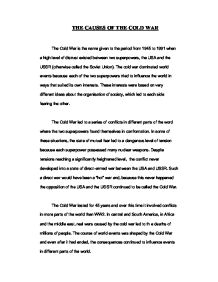 The Causes of the Cold War.

THE CAUSES OF THE COLD WAR The Cold War is the name given to the period from 1945 to 1991 when a high level of distrust existed between two superpowers, the USA and the USSR (otherwise called the Soviet Union). The cold war dominated world events because each of the two superpowers tried to influence the world in ways that suited its own interests. These interests were based on very different ideas about the organisation of society, which led to each side fearing the other. The Cold War led to a series of conflicts in different parts of the word where the two superpowers found themselves in confrontation. In some of these situations, the state of mutual fear led to a dangerous level of tension because each superpower possessed many nuclear weapons. Despite tensions reaching a significantly heightened level, the conflict never developed into a state of direct-armed war between the USA and USSR. Such a direct war would have been a "hot" war and, because this never happened the opposition of the USA and the USSR continued to be called the Cold War. ...read more.

The USSR became suspicious of the USA when the details of the Marshall plan emerged. The Soviets pressured eastern European countries to create communist governments and in the case of Czechoslovakia, the communist party created enough disorder to scare its president into allowing a communist government to be formed. The USA responded by discussing with Britain the idea of a military alliance in Western Europe and this eventually led to the North Atlantic Treaty organisation (NATO) in 1949. Six years later the Soviet Union formed the Warsaw Pact, a similar military grouping based around the USSR and the eastern European states with communist governments. The Warsaw Pact shows that the USSR was worried about the strength of NATO. This helped bring around the cold war. After 1945, Stalin felt particularly vulnerable, as the Soviet Union had suffered great destruction during the war, whereas the USA was the world's richest power. Using rigged elections and other methods, Stalin ensured Communists came to power in Eastern European countries and that they would accept Soviet control. This would give the USSR a buffer zone in any future war. ...read more.

These relations were weak mainly because of ideology. This makes ideology a long-term cause and probably the most important cause of the Cold War. Ideology acts as a trigger. The leaders of both countries both believed that a country could only be run in one way the USSR thought this was using communism and USA using capitalism. This caused disagreement and conflict, which meant that all the above causes of the Cold War happened. If the two superpowers had been less suspicious of each other perhaps the cold war could have been prevented, Stalin could have accepted the Marshall Plan instead of viewing it as an American ploy to dominate Europe and threaten the USSR. The Truman administration could have tried to understand the soviet unions needs to defend itself against another invasion instead of act if as if the USSR was intent on taking over the world and threatening America. Perhaps the leaders of the two superpowers were too alike and too willing to see the world from only their points of view. Were the superpowers to quick to act in ways that were seen by the other side as threatening and too stubborn to make concessions and reach an agreement? Or were they acting in the best interests of their country. ...read more.