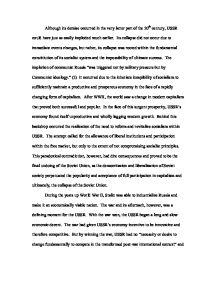 The causes of the collapse of the USSR.

Although its demise occurred in the very latter part of the 20th century, USSR could have just as easily imploded much earlier. Its collapse did not occur due to immediate events changes, but rather, its collapse was rooted within the fundamental constitiution of its socialist system and the impossibility of ultimate success. The implotion of communist Russia "was triggered not by military pressure but by Communist ideology." (2) It occurred due to the inheriate incapibility of socialism to sufficiently maintain a productive and prosperous economy in the face of a rapidly changing form of capitalism. After WWII, the world saw a change in modern capitalism that proved both successful and popular. In the face of this surgent prosperity, USSR's economy found itself unproductive and wholly lagging western growth. Behind this backdrop occurred the realization of the need to reform and revitalize socialism within USSR. The attempt called for the allowance of liberal institutions and participation within the free market, but only to the extent of not compromising socialist principles. This paradoxical contradiction, however, had dire consequences and proved to be the final undoing of the Soviet Union, as the democritazion and liberalization of Soviet society perpetuated the popularity and acceptance of full participation in capitalism and ultimately, the collapse of the Soviet Union. During the years up World War II, Stalin was able to industrialize Russia and make it an economically viable nation. ...read more.

Brezhnev and Chernenko, both part of the older generation of rule, passed on, as did the rest of their inner circle. They were succeeded by Gorbachev, who was seen as "the long awaited 'reformer'. They were right"(57). When Gorbachev came into power in 1985, he "showed himself to be resolutely committed to renewing socialist ideals"(57). The problem he faced was how to solve the apparent discrepancy between socialist ideals and their realities. To revitalize socialism, Gorbachev tried to open up Soviet society (glasnost), rebuild its infrastructure (perestroika) and democritize the political and economic systems. This loosening of Russian society, however, would prove to be its final blow. Through Glasnost, Gorbachev appealed to all members of society "through a campaign for openness in public life"(60). During 1986 and 1987, Gorbachev encouraged open discussion on many issues that were once considered taboo. The result, however, was a sense of disillutionment among many Russians. People, upon realizing the realities of past attrocities and years of being lied to became more critical of socialism. Unlike past relaxations, Glasnost caused many to "desanctify Lenin" and led to general unrest among the people. Eventually there seemed to be "no one ready to defend socialism and the Union, except those castigated as 'Stalinists' opposed to reform"(73). Along with glasnost, perestroika attempted to save socialism but only ultimately undermined it. Realizing that the principle behind planned industrial growth, that of high quantity output, was causeing poor results, Gorbachev attempted to "unblock" the economy by allowing grerater flexability and autonomy. ...read more.

The answer lies in the fact that Gorbachev and many Soviets within his generation came to the realization that although socialism needed reform, it would not be able to do so without destabilizing the entire system. This destabilizing would then only be able to be solved through a return to Stalinist meathods. Given this catch-22, Gorbachev came to the conclusion that "for him, amid the turmoil of perestroika, to have to return to Stalinist meathods to preserve the system would not only destroyed his international reputation but make a lie of his whole inner life"(177). He then therefore rejected the plausibility and superiority of socialism and instead opted for western style social democracy. Although the Soviet Union finally collapsed during the late 1980s and early 1990s, it began down the road to dismemberment much earlier. Although it struggled to win the "war" of world supremacy for several decades, its downfall was not caused its enemies. Rather, the Soviet Union imploded from the very fact that in a modern capitalistic society, its socialist economy simply could not keep up. As its economy began to lag and become outdated, the need for reform and change became self evident. The changes necessary for successful reform, however, required refutation of basic socialist principles. Because of that inevitability, the Soviet Union, armed and able to destroy the world, quietly and peacefully conceded defeat and gave up its dream of a socially just and equal society and began down the difficult road towards a free democratic capitalistic state. ...read more.