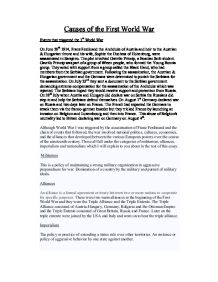 The Causes of the First World War

Causes of the First World War

On June 28th1914, Franz Ferdinand the Archduke of Austria and heir to the Austrian & Hungarian throne and his wife, Sophie the Duchess of Hohenburg, were assassinated in Sarajevo. The plot involved Gavrilo Princip, a Bosnian Serb student. Gavrilo Princip was part of a group of fifteen people, who formed the Young Bosnia group. They acted with support from a group called the Black Hand, who had members from the Serbian government. Following the assassination, the Austrian & Hungarian government and the Germans were determined to punish the Serbians for the assassination. On July 23rd they sent a document to the Serbian government demanding extreme compensation for the assassination of the Archduke which was rejected. The Serbians hoped they would receive support and protection from Russia. On 28th July when Austria and Hungary did declare war on Serbia the Russians did step in and help the Serbians defend themselves. On August 1st Germany declared war on Russia and two days later on France. The French had expected the Germans to attack them via the franco-german boarder but they tricked France by launching an invasion on Belgium and Luxembourg and then into France.  This abuse of Belgium's neutrality led to Britain declaring war on Germany on August 4th.

Although World War I was triggered by the assassination of Franz Ferdinand and the chain of events that followed, the war involved national politics, cultures, economics, and the alliances that developed between the various European powers over the course of the nineteenth century. These all fall under the categories of militarism, alliances, imperialism and nationalism which I will explain to you about in the rest of this essay.

This is a policy of maintaining a strong military organization in aggressive preparedness for war. Domination of a country by the military and pursuit of military ideals.

An alliance is a formal agreement or treaty between two or more nations to cooperate for specific purposes. There were two main alliances at the beginning of the First World War and they were the Triple Alliance and the Triple Entente. The Triple Alliance consisted of Austria-Hungary, Germany, Bulgaria and the Ottoman Empire and the Triple Entente consisted of Great Britain, Russia and France. Later on the triple entente were joined by the USA and Italy and went on to beat the triple alliance.

The policy or practice of extending a states rule over other territories. An instance or policy of aggressive behavior by one state against another.

A sentiment based on common cultural characteristics that binds a population and often produces a policy of national independence or separatism. Loyalty or devotion to one’s country; patriotism. Exaggerated, passionate or fanatical devotion to a national community.

Overall there were many causes of the First World War. These were long, medium and short-term causes. Having investigated nationalism, imperialism and militarism it is evident they had their part to play in the build up of tensions over the previous century. The ultimate conflict was certainly sparked by the assassination of the archduke and with alliances in place causing more and more countries to join the battle the First World War started.