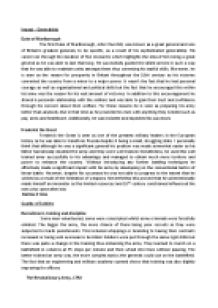 The Changing Nature of Warfare - Napoleon

﻿Impact - Generalship Duke of Marlborough The first Duke of Marlborough, John Churchill, was known as a great general and one of Britain?s greatest generals, to be specific, as a result of his sophisticated generalship. His career ran through the duration of five monarchs which highlights the idea of him being a great general as he was able to last that long. He successfully guided the allied armies in such a way that he was able to maintain unity amongst them thus conveying his tactful skills. Moreover, he is seen as the reason for prosperity in Britain throughout the 18th century as his victories converted the country from a minor to a major power. It wasn?t the fact that he had personal courage as well as organizational and political skills but the fact that he encouraged this within his army was the reason for his vast amount of victories. In addition to this encouragement he shared a personal relationship with the soldiers and was able to gain their trust and confidence through his concern about their welfare. For these reasons he is seen as preparing his army better than anybody else in that time as he provided his men with anything they needed such as pay, arms and healthcare. ...read more.

Moreover, several aspects of warfare had either changed or developed by the time of their army. An example of this is the size and sophistication of the army: they were now professional and paid armies which enhance the performance of the army and the size obviously made them much more effective on the battlefield. Also, mobile war was in effect thus making it easier for soldiers to travel around as they were able to move at a faster pace and equipped the same. Medical care as well as accommodation and food was also advanced and suited to match those armies. Weaponry and tactics A notable tactic used was designating the soldiers to suitable groups and formation. The formation of battalion columns: the general took into consideration the fact that not every soldier was highly skilful so he introduced the battalion column which barely required any training to perfect. They were positioned in such a way that they would forcefully make their way through an enemy?s line once the skirmishers had done their work. Skirmishers were troops who were extremely courageous and skilful. They were positioned in a screen in front of the army which initially protected the troops. ...read more.

This process was a mass conscription where every able bodied, unmarried men between 18-25 had to be conscripted. Others such as married men, women, children and the elderly were also assigned different jobs to contribute to war efforts. This reinforces the idea of the whole country going to war and participating rather than just those fighting. This was beneficial as it drastically increased the size of the armies and this Carnot was named ‘Organizer of Victory’ by the government. Public Opinion Now that the population were actually involved and participating they had an opinion and it was valid. Though they barely had anything negative to say many did disagree with the process of the Levée en Masse as it involved forcefully conscripting people against their own will. Medical Care There was a slow progress in medical treatment but it was still some kind of beneficial progress. In 1743, it was agreed that the field hospitals should be regarded as neutral for the sick. This benefited the wounded on the battlefield and contributed to the idea of the later Red Cross. In 1752, Pringle published a book which set out, what people thought at first were, good medical practices for armies but worse and included using ointments which contained harmful mercury. In 1761, Hunter introduced new methods to treat gunshot wounds but they were not actually considered until a year later. ...read more.