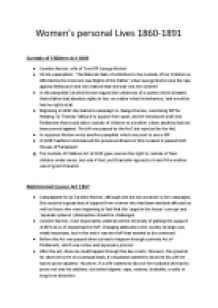 The changing position of women and the suffrage question. Revision notes

﻿Women?s personal Lives 1860-1891 Custody of Children Act 1839 * Caroline Norton, wife of Tory MP George Norton * Wrote a pamphlet - ?The Natural Claim of a Mother to the Custody of her Children as Affected by the Common Law Rights of the Father? when George Norton lost his case against Melbourne and she realised that she had ?lost her children? * In the pamphlet Caroline Norton argued the unfairness of a system which dictated that a father had absolute rights in law, no matter what his behaviour, and a mother had no rights at all. * Beginning in 1838 she started a campaign to change the law, convincing MP for Reading, Sir Thomas Talfourd to support her cause, and he introduced a bill into Parliament that would allow custody of children to a mother whom adultery had not been proved against. The bill was passed by the HoC but rejected by the HoL. * In response Norton wrote another pamphlet which was sent to every MP. * In 1839 Taulford reintroduced the previous bill and on this occasion it passed both Houses of Parliament. * The Custody of Children Act of 1839 gave women the right to custody of their children under seven, but only if the Lord Chancellor agreed to it and if the mother was of good character. Matrimonial Causes Act 1857 * Campaigned for by Caroline Norton, although she did not act alone in her campaigns. She received a great deal of support from women who had been similarly affected as well as those who were beginning to feel that the ?angel in the house? concept and ?separate spheres? philosophies should be challenged. * Caroline Norton, most importantly understood the necessity of gaining the support of MPs as so of impacting the HoP. Changing attitudes in the country at large was vitally important, but in the end it was the HoP that needed to be convinced. ...read more.

Black Friday * Friday 18th November 1910 * Emmeline Pankhurst and 300 women marched on the House of Commons in protest at the failure of the first conciliation bill. When they attempted to enter Parliament, the police responded with brutality. They had been instructed to not arrest the suffragettes and instead responded with sickening violence. * Some attempts have been made to excuse the behaviour of the police, arguing that they were used to dealing with the working class of the East-End. The women?s actions brought them into abrupt physical contact with the police and the police deemed that the ?youthful femininity? of many of their assailants to be an invitation to licence. Therefore their actions were unsurprising. * Others argue however, the behaviour of the police was tantamount to sexual abuse and was a direct result of the ideology of domesticity. That only men and prostitutes entered the public sphere. The Nature of the liberal Government 1906-1914 * The main political parties viewed women?s suffrage with apprehension. The impact that female emancipation would have on them politically as still an unknown quantity. * Parties felt that supporting the cause of female suffrage would cost them existing electoral support. * The 1906 election was a landslide for the Liberals. * There were a large number of supporters for female emancipation within the party, for example ? David Lloyd George * The majority meant that the party could theoretically push through any needed legislation through Parliament. * However, the Liberal Government were unwilling to give women the vote for 3 reasons: * 1) Asquith (PM from 1908) did not support the cause and was thus disinclined to designate Parliamentary time. * 2) The Liberal Governments majority was beginning to dwindle as a result of a number of by-elections. By 1910 the Liberals had become reliant on the support of the Irish Nationalists and Labour party to remain in power. Therefore, supporting such a controversial subject would likely lead to a fall from power. * 3) ...read more.

* 1867 Workshops Regulation Act * Workplaces with fewer than 50 people were forbidden to employ girls and boys under eight. Children aged 8-13 could only work part time. Young people and women were restricted to an 12 hour working day. * 1874 Factory Act * Minimum age raised to 9 yrs old. Working day reduced to 10 hours for women. * 1886 Shop Hours Regulation Act * Hours shortened * 1896 Factory Act * Employers were not allowed to employ a woman within four weeks of giving birth. * 1901 Factory Act * The number of hours a woman could work was reduced by one, and consolidated other acts. * 1906-1914 Shop Hours regulation Acts * Number of minor acts established a maximum of 64 hours a week for shop work Working women and Trade Unions * The influx of women into the labour force was seen as a direct challenge to men?s job security. Women were paid considerably less than men and were thus at times accused of undercutting their male colleagues and forcing down their pay. * Women were slow to unionise as their work was often seen as a temporary occupation prior to marriage. * Women had THREE ways to unionise? * First, they could join some unions that accepted women, e.g. NAU of Shop Assistants. * Other unions had women only sections run by men * Finally some women set up their own unions such as the Women?s Provident League. * Part of the role of the unions was to raise the profile of pay and conditions which women faced. * Trade Boards (1909) ? had the power to fix minimum wage rates in trades including tailoring, box-making and chain making. * Encouraged by Annie Bessant, some unionists favoured direct action and supported unionists in this enterprise. Bessants article on ?White Slavery? about girls in Byrant and Mays match factory led to connections with the Women?s Trade Union League and eventually enabled match girls to win a wage increase and an improvement in their working conditions. ...read more.