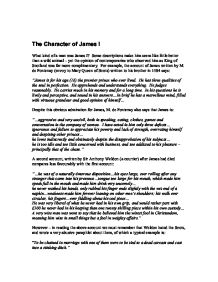 The Character of James I

The Character of James I What kind of a man was James I? Some descriptions make him seem like little better than a wild animal - yet the opinion of contemporaries who observed him as King of Scotland was far more complimentary. For example, the account of James written by M. de Fontenay (envoy to Mary Queen of Scots) written to his brother in 1584 says: "James is for his age (18) the premier prince who ever lived. He has three qualities of the soul in perfection. He apprehends and understands everything. He judges reasonably. He carries much in his memory and for a long time. In his questions he is lively and perceptive, and sound in his answers...In brief he has a marvellous mind, filled with virtuous grandeur and good opinion of himself... Despite this obvious admiration for James, M. de Fontenay also says that James is: "...aggressive and very uncivil, both in speaking, eating, clothes, games and conversation in the company of women. I have noted in him only three defects... ignorance and failure to appreciate his poverty and lack of strength, overrating himself and despising other princes... ...read more.

Observers who wrote during his reign as King of Great Britain, and James' own letters during that period, show him as timorous, impulsive, socially ill at ease, financially inept, and emotionally immature. However - they also show him to be intelligent, perceptive, a patron of the arts, and in possession of an astute wit. The issue is not merely James' characteristics, but a question of degree and extent. It is significant that many of the character studies describe James' physical appearance. Nowadays we separate character from physical appearance - but in the early seventeenth century the form and features of the physical body were believed to reflect the mind and soul, making physical defects quick to be seized upon by hostile writers. Many of James' personality traits can be traced back to his childhood. Deprived of both his parents as a baby (his mother was probably an accomplice in the murder of his father) he grew up as a lone boy who was to crave affection throughout his life. His marriage to Anne of Denmark became loveless after a successful start. James turned to a series of young men. The visit of his French cousin, Esme Stewart (later Duke of Lennox), in the 1580s when James was fourteen possibly awakened homosexual feelings and emotional dependence. ...read more.

Another part of James' character that attracted unfavourable contemporary comment was his lack of physical courage. There had been a number of plots against him when he was King of Scotland and within three years of his accession to the English throne those involved in the gunpowder plot tried to blow up not only the king but also the assembled members of the Lords and Commons. So James had good reason to be wary of assassins, especially after the death of Henry IV of France confirmed the vulnerability of kings. However, contemporaries did not like their sovereign to show signs of weakness. Sir Anthony Weldon wrote scathingly about James' padded clothes - designed to prevent a dagger from reaching his body. Along with his fear of personal violence went a much more praiseworthy desire to avoid war. His hatred of violence and persecution makes him more sympathetic to the modern reader, who is also more charitable towards his lack of physical beauty and his preference for young men. James hated war and sought throughout his reign to prevent England from being drawn into one. Ultimately, he failed - but much of the blame lies with Buckingham and Prince Charles, who exerted great pressure to persuade the king to agree to war against his better judgement. ...read more.