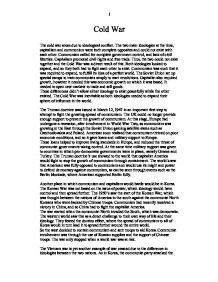 The cold war arose due to ideological conflict.

Cold War The cold war arose due to ideological conflict. The two main ideologies at the time, capitalism and communism were both complete opposites and could not exist with each other. Communism called for complete government control, and lack of civil liberties. Capitalism promoted civil rights and free trade. Thus, the two could not exist together and the Cold War was a direct result of this. Both ideologies looked to expand, and so they both had to fight each other to exist. Communism was such that it was required to expand, to fulfill its idea of a perfect world. The Soviet Union set up special camps to train communists simply to start revolutions. Capitalist also required growth, however it needed this was economic growth on which it was based. It needed to open new markets to trade and sell goods. ...read more.

The Truman doctrine's use showed to the world that capitalist America would fight to stop the growth of communism through containment. The world knew that American was fully opposed to communism and would use its might and power to defend democracy against communism, as can be seen through events such as the Berlin blockade, where American supported Berlin fully. Another place in which communism and capitalism would battle would be in Korea. The Korean War was not based on the issue of power, which ideology would have control and then spread further. The 1950's saw the start of the Korean War, which was thought between the nations of America in the south against the communist North Koreans who were backed by Chinese troops. Communism had recently received a victory in China, and so China had to fight the capitalist America. The war started when the communist North invaded the South, which was democratic. ...read more.

Americans feared further movement and used what they could to try and stop the spread of communism, resulting in many American casualties (4th highest war casualty toll). The Cold War can be seen as begun by traditional rivalry between the East and West. This rivalry had been going on for centuries, with the attacks of Genghis Khan, the splitting of the church and World War One. However all of these events were based before the creation of communism. It is the formation of communism that is the driving force for the split in the two nations, never before had an ideology challenged the west in its beliefs. The division can be seen when the West first tries to stop the spread of communism through the Truman doctrine. Latter it makes it clear, through the two wars, that it will do all in its power to contain communism and eventually stop it completely. ...read more.