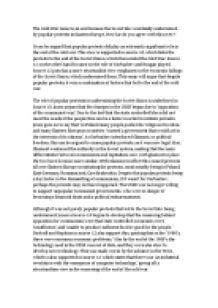 The Cold War came to an end because the Soviet bloc was fatally undermined by popular protests in Eastern Europe. How far do you agree with this view?

﻿The Cold War came to an end because the Soviet bloc was fatally undermined by popular protests in Eastern Europe. How far do you agree with this view? It can be argued that popular protests did play an extremely significant role in the end of the cold war. This view is supported in source 10, which links the protests to the end of the Soviet Union, which then ended the Cold War. Source 11 on the other hand focuses on the role of Gorbachev and Reagan played. Source 12 puts has a more structuralist view emphases on the economic failings of the Soviet Union, which undermined them. This essay will argue that despite popular protests, it was a combination of factors that led to the end of the cold war. ...read more.

Despite the popular protests being a key factor in the dismantling of communism, if it wasn?t for Gorbachev, perhaps the protests may not have happened. The USSR was no longer willing to support unpopular communist governments, who were in danger of becoming a financial drain and a political embarrassment. Although it was not purely popular protests that led to the Soviet bloc being undermined. Jones is Source 10 begins to develop that the reasoning behind opposition for communism were that state controlled economies were ?insufficient,? and ?unable to produce sufficient food or good for the people.? Dockrill and Hopkins in source 12 also support this, quoting that in the ?1980?s, there were enormous economic problems.? Also by the end of the 1980?s the technology used in the USSR was out of date, and they were also slow to develop new technology. ...read more.

Gorbachev had no choice but to reform due to the economic state in the Soviet Union, as which is supported in sources 10 and 12. Source 11 is a combination of the role of gorbachev and a triumphalist, as it suggests that Reagan also contributed in the ending of the cold war, who was not put under pressure to go against his beliefs by outside distractions. Therefore in conclusion popular protests did play a key role in the end of the cold war. Due to Gorbachev and his glasnost political movement, this caused a relaxation in the communist system, and Eastern European nations taking the advantage of the freedom causing popular protests, undermining the Soviet bloc. Despite this it was a combination of Gorbachev, Reagan, and a poor economic state, and popular protests that caused the decline of the Soviet bloc, eventually leading to the end of the cold war. ...read more.