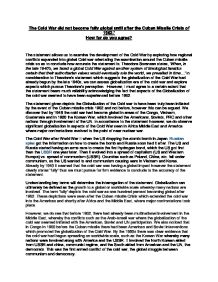 The Cold War did not become fully global until after the Cuban Missile Crisis of 1962. How far do you agree?

The Cold War did not become fully global until after the Cuban Missile Crisis of 1962.’

How far do you agree?

The statement allows us to examine the development of the Cold War by exploring how regional conflicts expanded into global Cold war orientating the examination around the Cuban missile crisis so as to conclude how accurate the statement is. Theodore Sorensen states, ‘When, in the late 1940's, we faced a global Cold War against another system of ideological fanatics certain that their authoritarian values would eventually rule the world, we prevailed in time…’ In consideration to Theodore’s statement which suggests the globalization of the Cold War had already begun by the late 1940s, we can assess globalization era of the cold war and explore aspects which pursue Theodore’s perception.  However, I must agree to a certain extent that the statement bears much reliability acknowledging the fact that aspects of the Globalization of the cold war seemed to have been experienced before 1962.

The statement given depicts the Globalization of the Cold war to have been truly been initiated by the event of the Cuban missile crisis 1962 and not before, however this can be argued. We discover that by 1948 the cold war had become global in areas of the Congo, Vietnam, Guatemala and in 1950 the Korean War, which involved the Americans, Soviets, PRC and other nations through involvement of the UN. In accordance to the statement however, we do observe significant globalization in aspects of the Cold War seen in Africa Middle East and America where major confrontations evolved to the point of near nuclear war.

The Cold War after World War II when the US dropping the atomic bomb in Japan. Russian spies got the information on how to create the bomb and Russia soon had it after. The US and Russia started having an arms race to create the first hydrogen bond, which the US got first then the USSR one year later. Then it evolved into a spread of capitalism (US and Western Europe) vs. spread of communism (USSR). Countries such as Poland, China, etc. fell under communism, so the US wanted to end communism causing wars in Vietnam and Korea.  Already by 1940 it seemed that the cold war was having a global impact however the statement clearly states ‘fully’ thus we must pursue for firm evidence to conclude to the accuracy of the statement.

Understanding key terms will determine the interrogation of the statement. Globalization can ultimately be defined as the growth to a global or worldwide scale whereby many nations are involved. The term ‘fully’ depicts the cold war as one hundred percent becoming global after 1962.These depictions were seen after the Cuban missile Crisis which extended the cold war into the Americas and shortly after Africa and the Middle East, where major confrontations took place.

However, we do see that before 1962, there had already been multinational involvement in the Middle East, whereby the conflicts such as the Arab-Israeli war where the globalization of the cold war seemed initiated with the American, Soviet and UN participation. We also noticed that in Congo in 1960 before the Cuban missile there had been American and Soviet interventions which promoted the globalization of the Cold War. By the 1950s there was clear evidence that the cold war had begun spreading on worldwide scale, such as the Korean War whereby many nations were involved along with America and the USSR. It involved the North Korean aided from USSR and china, communist regime, and the South aided from American and the UN, the democrats. This was the first armed conflict of the cold war, the global struggle between communism and democracy.

Moreover, we recognize that before 1962 involvement of the superpowers were of a different nature and direct confrontation rarely occurred. The Cuban Missile Crisis was significantly different from the earlier issues, for the first time USA and the USSR had come into direct conflict outside Europe. Issues such as the Middle East crisis or involving the Americas were significantly modified after 1962; they escalated into major confrontations of the global cold war. As it was seen with the Cuban missile crisis, situations of  near nuclear war, which emphasizes the extent, to which the cold war had intensified and was now an exposure to the whole world that seemed fearful of the threat of nuclear war.

We do perceive the cold war has been more regional and that confrontations were rarely direct but rather through propaganda or other events such as the Berlin blockade where we saw Soviet and American indirect confrontation, throughout the late 1950s we must accept that the cold war didn’t seem to have ‘fully’ gone global. Though we see near brink of war in 1954

However before 1962, events such as showed aspects of the cold war going global, with the US granting  independence to the Philippines In Africa and the Soviet Union giving money and weapons to opposing sides in many civil wars (Angola, Somalia, Ethiopia) Pakistan became an ally of the US whereas India stayed neutral. After WWII many colonies began demanding and fighting for their independence Africa & Asia Superpower Actions Issue or Conflict Region or Country. We see that the main focus in Europe was no longer the case more international involvement worldwide conflicts of the cold war were seen.

We also see with the advancement in technology the nature of the cold war changing developing more confrontation but on a global scale. There were the arms races by the 1950’s where the US & USSR both had enough nuclear weapons to destroy each other several times over. By 1957 the USSR launched 1 st ever satellite: Sputnik. “Space Race” began, NASA is created both countries develop rocket technology. Here we see the confrontation increasing and how technology before the 1962 seemed to involve the whole world into the cold war, resulting from already global threats technologically.

However the statement presents the Cuban missile crisis as the source from which the cold war fully globalised. Thus we cannot accept aspects of globalization occurring, whereas by 1962 we see the Vietnam War as evidence of a global cold war.  The Vietnam War resulted in intense cold war fighting with the involvement of USA and USSR along with many other nations. This conflict within the aspect of the cold war had global effect on the world and its public.

However by 1950s the new military-industrial complexes along with advancement in technology saw the speeding up of globalization of the cold war. With maximum ways to reach across the world, the space race, etc, we see the world began to seem smaller by the 1950s and the cold war affected the world on a global scale. However we must accept that this was a development of the cold war by 1962 as stated, the cold war had indeed become a global worry. A cold War once fought by words and propaganda now sought for direct confrontations. It would seem that after the Cuban missile crisis, whereby involvement of nuclear missiles was seen, the nature of the cold war ameliorated and changed. We can evaluate to a large extent the cold war become worldwide aspect.

As a result, I can conclude that before 1962 the cold war saw aspects of globalization, developments in technology and communication increased the global scale of the two superpowers confrontation, however it was only until 1962 that the cold war had indeed fully globalised.