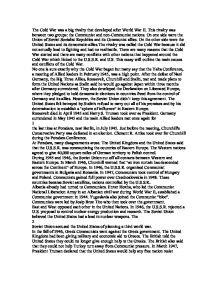 The Cold War was a big rivalry that developed after World War II.

The Cold War was a big rivalry that developed after World War II. This rivalry was between two groups: the Communist and non-Communist nations. On one side were the Union of Soviet Socialist Republics and its Communist allies. On the other side were the United States and its democratic allies.The rivalry was called the Cold War because it did not actually lead to fighting and had no real battle. There are many reasons that the Cold War started and there are many conflicts with other nations that happened around the Cold War which linked to the U.S.S.R. and U.S. This essay will outline the main causes and conflicts of the Cold War. No one is sure exactly why the Cold War began but many say that the Yalta Conference, a meeting of Allied leaders in February 1945, was a high point. After the defeat of Nazi Germany, the Big Three Allies, Roosevelt, Churchill and Stalin, met and made plans to form the United Nations as Stalin said he would go against Japan within three months after Germany surrendered. They also developed the Declaration on Liberated Europe, where they pledged to hold democratic elections in countries freed from the control of Germany and its allies. However, the Soviet Union didn't keep this agreement. The United States felt betrayed by Stalin's refusal to carry out all of his promises and by his determination to establish a "sphere of influence" in Eastern Europe. Roosevelt died in April 1945 and Harry S. Truman took over as President. Germany surrendered in May 1945 and the main Allied leaders met once again for 1 the last time at Potsdam, near Berlin, in July 1945. Just before the meeting, Churchill's Conservative Party was defeated in an election. Clement R. Attlee took over for Churchill during the Potsdam Conference. At Potsdam, many disagreements arose. The United Kingdom and the United States said that the U.S.S.R. ...read more.

This was known as the Lublin Poles. Britain and the USA on the other hand had supported a different group called the London Poles, who were strongly against communism. The Yalta Conference appeared to be a success, but Stalin had elected a pro-communist government into Poland, but this was not what Churchill and Roosevelt had wanted. After the Yalta Conference, many actions and events took place, which greatly changed the relationships between the dominant country leaders. To begin with, America had successfully tested the Atomic Bomb. In addition, Churchill had lost the general election from England, and Atlee became the new British leader. Then, President Roosevelt had died, leaving Truman to be appointed President. Stalin's armies were occupying most of Eastern Europe as well. When Truman took office, he wanted to put a stop to the growth of Soviet influence in Eastern Europe, but there were still many Soviet troops in these countries. There was little the USA could do, until they were informed that Britain could not afford to hold British troops in Greece and Turkey. Truman gave money to the UK so that the troops could remain stationed there. This was known as "containment," meaning the prevention of communist expansion. With this Truman Doctrine came the Marshall plan, an attack on Communist roots. This plan/idea was to give money to any country under threat from being taken over by the Soviet Union, so that they could prevent communism to spread into their country. Stalin rejected this plan though. The Marshall Plan was an extremely generous act by the United States. It was also motivated by American self-interest. In response to the Marshall Plan, the Soviets set up two other organizations: the Communist Information Bureau, an organization to strengthen relationships between communist nations, and the council for Mutual Economic Aid, which was a rival to the Marshall Plan. At this time, Berlin was divided into zones, which were similar to the zones that split Germany. ...read more.

It was a way of life. Containment 1947-491947 Jan. 21 - George Marshall replaces Byrnes as Secretary of State � George C. Marshall Museum � George Marshall: Year of Decision - Man of the Year article published Jan. 5, 1948 by Time magazine, from the Time-Warner Pathfinder archives � Underscretaries Dean Acheson, Robert Lovett, Will Clayton � new Policy Planning Staff under George Kennan � moved from old State-War-Navy building to new air-conditioned Foggy Bottom HQ Mar. 12 - Truman Doctrine � Brit. Feb. 12 announced Greece pullout � see the text of Truman's speech to Congress � "I believe that it must be the policy of the United States to support free peoples who are resisting attempted subjugation by armed minorities or by outside pressures." � "national security" not defense, unilateral not UN, domino theory not regionalism � signed May 22 with Vandenberg amendment that affirmed U.S. support for United Nations June 5 - Marshall Plan � "directed not against any country or doctrine but against hunger, poverty, desperation and chaos" - but called by Truman "two halves of the same walnut" � Clayton's May 19 memo - US should create own economic recovery program for Europe - not UN OR UNRRA � DeGaulle created his new RPF party Apr. 7 - Truman fears "the harvest of little Caesars and their acts of aggression" � Marshall Plan 50th anniversary from USIA, including the text of the June 5 speech at Harvard � For European Recovery: The Fiftieth Anniversary of the Marshall Plan from Library of Congress � Paul Hoffman and Averell Harriman meet at the July Paris conference that established the multilateral ERP - photo from USNews 1948/09/24 � "Mediterranean Patrol" cartoon � "How Westinghouse can help you" ad July 26 - National Security Act civilian Secretary of Defense - 1st was James Forrestal National Security Council, CIA but no UMT sought by Marshall - chart charter of the National Secuirty Agency Oct. 24, 1952 to coordinate intelligence activities of State and Defense with the CIA priority given to Air Force - SAC created Mar. 21, 1946 ...read more.