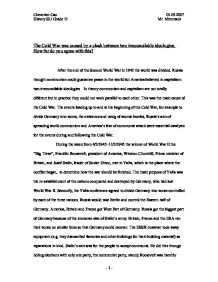 The Cold War was caused by a clash between two irreconcilable ideologies. How far do you agree with this?

The Cold War was caused by a clash between two irreconcilable ideologies. How far do you agree with this? After the end of the Second World War in 1945 the world was divided. Russia thought communism could guarantee peace in the world but America believed in capitalism: two irreconcilable ideologies In theory communism and capitalism are not totally different but in practice they could not work parallel to each other. This was the main cause of the Cold War. The events leading up to and at the beginning of the Cold War, for example to divide Germany into zones, the existence and using of atomic bombs, Russia's aim of spreading world communism and America's fear of communist attack were essential catalysts for the events during and following the Cold War. During the week from 4/2/1945-11/2/1945 the winner of World War II the "Big Three", Franklin Roosevelt, president of America, Winston Churchill, Prime minister of Britain, and Josef Stalin, leader of Soviet Union, met in Yalta, which is the place where the conflict began, to determine how the war should be finished. ...read more.

The western nations felt necessary that the liberated states of Eastern Europe should be re-established with a democracy and a capitalist economy. They believed that these systems were more civilized and less violent. This resulted in a clash of the two ideologies. The most visible part of the Cold war was the arms race. On July 24 1945 at the Potsdam Conference Truman told Stalin that they had a new weapon of unusual destructive force. Officially Stalin said that he was glad to hear it and hoped America would make "good use of it against the Japanese"(Harry Truman's version, 1955). Only a few days after Truman's announcement Hiroshima were destroyed by the atomic bomb on 8 September 1945. Two days later America dropped another bomb on Nagasaki. The war against Japan was ended without the need of Russia and so they did not take part in the occupation of Japan. The political demonstration of the superiority of the American military created fear in the Russian government. Also the fact that America had more than one bomb scared the world. ...read more.

The USSR was ready for some concessions, but the US made no real effort and by June 1946, the talks had ended. The absence of a US loan made the USSR more interested in reparations. In the treaty of Potsdam each country was permitted to extract reparations from its zone, but only the USSR did so. In light of these facts, the Cold War was caused by irreconcilable ideologies and differences between the leaders of the two ideologies, capitalism and communism. This was mirrored in the treatment and division of Germany, which was discussed in Yalta.The two countries, Russia and America, had so many ideological differences that they were bound not to get along. America wanted equal rights, freedom etc but Russia wanted dictatorship with no individual rights or freedom - both totally different. The battleground was created and tensions ran high. For the next 46 years, the United States and Russia would fight a war of nerves without any casualties. The Cold War had begin. 1108 Words Chenchen Cao 01.05.2007 History SL/ Grade 11 Mr. Mimmack - 1 - ...read more.