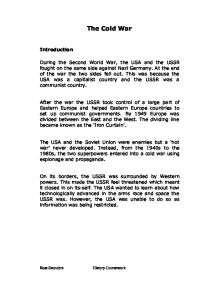 The Cold War Introduction During the Second World War, the USA and the USSR fought on the same side against Nazi Germany. At the end of the war the two sides fell out. This was because the USA was a capitalist country and the USSR was a communist country. After the war the USSR took control of a large part of Eastern Europe and helped Eastern Europe countries to set up communist governments. By 1949 Europe was divided between the East and the West. The dividing line became known as the 'Iron Curtain'. The USA and the Soviet Union were enemies but a 'hot war' never developed. Instead, from the 1940s to the 1980s, the two superpowers entered into a cold war using espionage and propaganda. On its borders, the USSR was surrounded by Western powers. This made the USSR feel threatened which meant it closed in on its-self. The USA wanted to learn about how technologically advanced in the arms race and space the USSR was. However, the USA was unable to do so as information was being restricted. The U2 Plane Incident On May 1st 1960, an American U2 spy plane was shot down over the USSR. ...read more.

This source is reliable as it is from the Vice President of the US, and therefore will not have been changed over time, although there is likeliness that the source would be bias. The source would be useful when looking at what the US government thought of the situation in Vietnam. Source B5 shows us that when Southern Vietnam had lost much of its control over the South to Viet Cong, President Kennedy made a momentous decision in 1962 where he authorized 4,000 American 'advisers' to help the South Vietnam government put its military house in order, as well as sending financial and material help to the country. This resulted a few years later in major American involvement and the loss of 50,0000 American lives. This source is reliable, considering the text was taken from a book written by an established Historian in 1976, when he would have had time to properly analyse what happened in Vietnam. This source would be useful when studying the actions which affected the results of the Vietnam War. Espionage and Propaganda During the Cold War, espionage and propaganda were used by both the Americans and the Russians. ...read more.

The source would be extremely useful when investigating the data concerning the migration from East to West. Source D2, part II, says that Khrushchev tried to 'frighten' Kennedy by giving the impression that the Soviet Union was willing to pursue nuclear war to "get their way on Germany". These impressions were not altogether convincing, and resulted in the Americans refusing to be pushed ultimately out of Europe, out of Germany, or even out of Berlin. This shows that the Americans were not to be intimidated by the Soviet Union, and a meeting after the Vienna meeting ended with Kennedy leaving in a sombre mood without the situation improving. Source D3 is part of a positively-spoken speech made by President Kennedy in July 1961 about Berlin. He stated that he heard of Berlin being "militarily untenable" and that he wasn't surprised by it. Kennedy also claimed that "brave men" would make the dangerous spot tenable. This source is reliable to an extent, but wholly biased, with little truth. I think Kennedy was simply trying to cover up something bad and make the morals of people who heard him, higher. The source is useful when looking at the strategies that the Americans used to cover up bad situations, and increase public moral. Ross Saunders History Coursework ...read more.