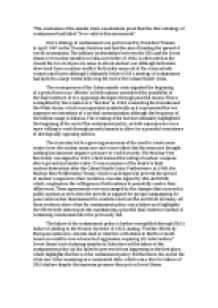 The conclusion of the missile crisis was absolute proof that the USAs strategy of containment had failed. How valid is this assessment?

ï»¿“The conclusion of the missile crisis was absolute proof that the USA’s strategy of containment had failed.” How valid is this assessment? USA’s strategy of containment was put forward by President Truman in April 1947 as the Truman Doctrine and had the aim of limiting the spread of world communism. The military confrontation between the USA and the Soviet Union over nuclear missiles in Cuba, in October of 1962, is often cited as the closest the two rival powers came to all-out nuclear war although both sides drew back from a nuclear conflict. Both sides came out of the crisis as both winners and losers although I ultimately believe USA’s strategy of containment had failed to a large extent following the end of the Cuban Missile Crisis. The consequences of the Cuban missile crisis signaled the beginning of a period known as ‘détente’ as both nations considered the possibility of the dual existence of two opposing ideologies through peaceful means. ...read more.

Furthermore, in 1968, the Nuclear Non-Proliferation Treaty, which was designed to prevent the spread of nuclear weapons to other countries, was also signed by USA and USSR, which, emphasizes the willingness of both nations to peacefully resolve their differences. These agreements were encouraged by the changes that occurred in public opinion as seen from the growth in support for groups campaigning for peace and nuclear disarmament in countries such as USA and West Germany. All these evidence shows that the containment policy was a failure as it highlights the efforts both nations put into maintaining a peaceful dual existence instead of containing communism like USA previously did. The failure of the containment policy is further exemplified through USA?s failure of abiding to the Monroe Doctrine of 1823, stating, ?Further efforts by European nations to colonize land or interfere with states in North or South America would be viewed as acts of aggression requiring U.S. ...read more.

Despite USA’s strategy of containment evidently failing, the immense pressure USA put on USSR could also be seen as a positive outcome as it shited and moved the bipolar world closer towards greater cooperation prior to the era of détente which was to follow. One can argue that this was containment in a way as it stalled soviet aggression through peaceful means. USA also led to a souring Sino-soviet relationship due to Khruschev’s failure of keeping the missiles in Cuba, which could have positively hindered the growth of communism. In conclusion, I believe following the Cuban Missile Crisis, both superpowers and the world saw a greater need for peaceful coexistence as they were on the brink of a very destructive nuclear war. Although it is dubious that they genuinely wanted it, attempts for a dual existence of opposing ideologies is evident and both superpowers felt that peaceful coexistence was necessary at that point of time, therefore, rendering the policy of containment an ultimate failure. ...read more.