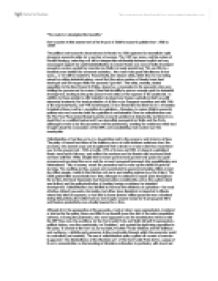 &quot;The costs far outweighed the benefits.&quot; How accurate is this assessment of the impact of Stalin's economic policies from 1928 to 1939?

"The costs far outweighed the benefits." How accurate is this assessment of the impact of Stalin's economic policies from 1928 to 1939? The political and economic circumstances in Russia by 1928 appeared to necessitate rapid change in economic policy for a number of reasons. The 1927 war scare, and the nature of Marxist ideology, assuming as it did an inseparable relationship between capital and war, encouraged support for rapid industrialisation to ensure Russia was economically developed enough to survive against her enemies (as Stalin famously proclaimed, "We are fifty to a hundred years behind the advanced countries... We must make good this distance in ten years... or we will be crushed"). Economically, the scissors crisis, which thus far was being solved by cutting industrial prices, meant that the urban centres of Russia faced food shortages and low wages while the peasants "got rich". This crisis, crucially, stoked opposition to the New Economic Policy, viewed as a concession to the peasantry who were holding the government to ransom (thus their inability to procure enough grain for industrial development, leading to the grain procurement crisis) ...read more.

It created in the form of, for example, Machine Tractor Stations and the kolkhozy and sovkhozy, a definite party presence in the countryside through which the peasantry could be controlled (and crushed). The use of collectivisation policy against all manner of enemies is apparent - the disobedience of the Ukrainian arm of the Communist Party led to a purge of it and a concentration on the breaking of Ukrainian nationalism in particular; with travel out of the Ukraine banned (the introduction of internal passports strengthened state control of movement), as well as relief operations (since as far as the state was concerned no famine was occurring). The result of Stalin's economic policy here was the establishment and consolidation of Party control over the part of Russia it had previously failed to conquer. Presented by the government as a war against the countryside, collectivisation "broke" the peasantry. It was a vengeance, an solution to the concession both to the country and capitalism that was the New Economic Policy, and to the party members who espoused it (e.g. Bukharin; later purged). As a great political victory for Stalin it made his position as leader more secure. ...read more.

This fault was also visible in the mechanisation of agriculture: tractors were poorly maintained and peasants often had no idea how to run them. Overall, whilst the Five Year Plans saw substantial and undeniable progress in industrial production, the big picture was far bleaker in agriculture. Since Stalin's economic policy as a whole rested on the horrendous failure (economically) of collectivisation, no matter the political benefits, one cannot help but conclude that the costs largely outweighed the benefits. It is arguable that the industrial "revolution" was indeed a necessary and crucial aspect of Soviet policy, and that had the NEP continued for another 25 years as Bukharin advocated, the Soviet Union would have been completely unable to have won the Great Patriotic War. However, it is also arguable that given the massive human cost (later Soviet policies designed to alleviate the massive population loss of the War, which placed punitive taxes on those with fewer than two children and outlawed abortion, may well have been less- or unnecessary had millions of Russians not been slaughtered or starved during the 1930s) of collectivisation, that it was simply not worth it. The benefits for Stalin, however, who would become the undisputed dictator of the USSR, and the Party, who finally consolidated their control over the country, are undeniable. ...read more.