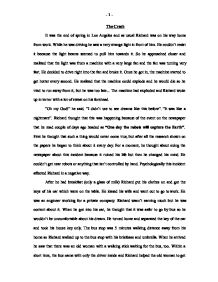 The Crash It was the end of spring in Los Angeles and as usual Richard was on his way home from work. While he was driving he saw a very strange light in front of him. He couldn't resist it because the light beams seemed to pull him towards it. So he approached closer and realized that the light was from a machine with a very large fan and the fan was turning very fast. He decided to drive right into the fan and broke it. Once he got in, the machine started to get hotter every second. He realized that the machine could explode and he would die so he tried to run away from it, but he was too late... The machine had exploded and Richard woke up in terror with a lot of sweat on his forehead. "Oh my God!" he said. "I didn't use to see dreams like this before". "It was like a nightmare". Richard thought that this was happening because of the event on the newspaper that he read couple of days ago headed as "One day the robots will capture the Earth". ...read more.

Two of the children started to jump with happiness. The bus started to move as soon as the old woman sat down. The bus stopped a few times and later it was full of people. There were two young boys in front Richard at the back seat. They were talking about the news on the paper, the same incident that the Richard dreamed about. One told the other that "It isn't true, robots are made by humans and we aren't so stupid to create machines that could take control of the Earth" and the other one nodded and said "The people who believe this are very naive and can't realize that the newspapers just do this for the advertisement". Richard heard all of these and thought about it again. Then he started to laugh in a few seconds and he was in a very relaxed mood. Richard looked out of the window and called out to the driver: "Can you stop here, please?" The bus stopped and Richard slowly walked to the exit door of the bus. He gave the ticket to the driver and got out of the bus. ...read more.

He went near his wife and kissed her again. She said "You are early today..." and Richard replied that "There wasn't much work." He went upstairs to take his clothes off and he realized that his mobile phone was missing. He looked into his pocket and briefcase but there was no sign of it. He panicked and decided to go and search for it in the office. Immediately he got into his car and headed towards his office. When he arrived, still there were some of his colleagues working in the office so before Richard said anything they gave him his mobile back. Richard felt relieved and thank to his colleagues before leaving the office. Then he left immediately to go back to his car. On his way he remembered again the dream that he saw in the morning and started to laugh. Richard got so carried away that he didn't see the big truck parked in front of him carrying a new robot, which was built like an airplane to carry things from one place to another automatically. Until he realized the truck right in front of him, it was too late to turn sideways and with a loud noise the man slammed on his brakes and he heard the crash... - 1 - ...read more.