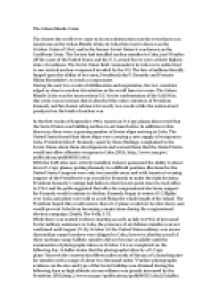 The Cuban Missile Crisis was the most serious U.S.-Soviet confrontation of the Cold War

﻿The Cuban Missile Crisis The closest the world ever came to its own destruction was the event known to Americans as the Cuban Missile Crisis. In Cuba this event is known as the October Crisis of 1962, and in the former Soviet Union it was known as the Caribbean Crisis. The Soviets had installed nuclear missiles in Cuba, just 90 miles off the coast of the United States and the U. S. armed forces were at their highest state of readiness. The Soviet Union field commanders in Cuba were authorized to use tactical nuclear weapons if invaded by the U.S. The fate of millions literally hinged upon the ability of two men, President John F. Kennedy and Premier Nikita Khrushchev, to reach a compromise. During the next two weeks of deliberation and negotiation, the two countries edged as close to nuclear devastation as the world has ever come. The Cuban Missile Crisis was the most serious U.S.-Soviet confrontation of the Cold War; this crisis was so intense that it absorbed the entire attention of President Kennedy and his closest advisers for nearly two weeks while the nation stood paralyzed on the brink of nuclear war. In the first weeks of September 1962, American U-2 spy planes discovered that the Soviet Union was building surface-to-air launch sites. ...read more.

Lastly, a Navel blockade was proposed to stop the Soviet Union from shipping military equipment to Cuba. (Trueman, Cuban, http://www.historylearningsite.co.uk/cuba.htm ) When discussing these strategies President Kennedy and his advisers had to take into consideration how the Soviet Union and Cuba would react to decisions made by the United States. The initial response among most of the participants was that the missiles had to be bombed, but Kennedy was not convinced that this was the best route to take. Throughout the next couple of days the security committee became more and more divided. Eventually the majority of the committee favored a navel blockade of Cuba and Kennedy accepted their decision. (Marxists, The Missile, http://www.marxists.org/history/cuba/subject/missile-crisis/ch03.htm ) In a televised address on October 22, President Kennedy announced to the American public the discovery of the missile installations and proclaimed that the United States will "regard any nuclear missile launched from Cuba against any nation in the Western Hemisphere as an attack by the Soviet Union on the United States, requiring a full retaliatory response upon the Soviet Union." Kennedy imposed a strict quarantine on all Cuban-bound military equipped ships to prevent the arrival of more missiles. The United States naval forces would intercept and inspect ships to determine whether they were carrying weapons. For several tense days Soviet vessels on their way to Cuba avoided the quarantine zone, and Khrushchev and Kennedy communicated through diplomatic negotiation. ...read more.

In August an agreement was reached between the two countries on a test ban treaty that prohibited the testing of nuclear weapons in the atmosphere. Schaller states, "the two sides promised to work on a more comprehensive treaty banning underground nuclear explosives as well." In addition, three months after the Cuban Missile Crisis the United States secretly agreed to remove all its nuclear missiles from Turkey and Italy, offering the Soviets a little satisfaction. (Schaller, Present Tense, 191) The Cuban Missile Crisis was the first and only nuclear confrontation between the United States and the Soviet Union and regarded by many as the world's closest approach to nuclear war. The event appeared to frighten both sides and it marked a change in the development of the Cold War. U.S. forces around the world were placed on alert. The United States had observed the Soviet Union building offensive nuclear missile bases in Cuba, just 90 miles from U.S. soil. The President called together his most trusted advisers to discuss several courses of actions including everything from doing nothing to invading Cuba. After much debate, a naval blockade of the island emerged as the leading choice. Tensions mounted over the next few days as the world wondered if there could be a peaceful resolution to the crisis. Although short, the intensity of the Cuban Missile Crisis completely consumed President John F. Kennedy's and his advisors as they worked toward a solution. Eventually the President and Khrushchev were able to achieve a peaceful resolution. ...read more.