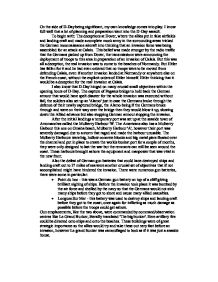 On the side of D-Day being significant, my own knowledge comes into play. I know full well that a lot of planning and preparation went into the D-Day assault. To begin with: The deceptions at Dover, where the allies put in fake airfields and landing craft and made a complete mock army in the surrounding areas tricked the German reconnaissance aircraft into thinking that an invasion force was being assembled for an attack at Calais. This belief was made stronger by the radio traffic that the Germans picked up from Dover, the transmissions were announcing the deployment of troops to this area in preparation of an invasion of Calais. But this was all a deception, the real invasion was to come to the beaches of Normandy. But Hitler has fallen for it and he had even ordered that no troops were to be moved from defending Calais, even if another invasion landed at Normandy or anywhere else on the French coast, without the explicit orders of Hitler himself. ...read more.

Before the invasion took place it was bombed by the air force and shelled by the navy so that the Germans would not sink many ships before they got to shore and cause many allied casualties. * Longues Sur Mer - this battery was used to destroy ships and landing craft before they got to the coast, once again for inflicting as much damage as possible before the troops could get ashore. Gun emplacements, like the two above, were commanded by command/observation centres like Le Grand Bunker, literally translated 'The big bunker'. Here artillery fire could be directed onto ships and onto the beaches. These buildings were of great strategic importance so the allies would try and take these out very fast before an invasion, however Le grand bunker was camouflaged to look as if it was just a seaside house. The allies faced many objectives and tasks to win the war, and D-Day can be argued that it was the begging of the end of the second world war, but the other argument is that D-Day was not what condemned the Germans to losing it ...read more.

Germans, Americans and British row after row and occasionally buried together. I believe that if the Russians did not come into the war than the outcome could have been much different, and if Stalin did not do his 3 5 year plans to modernise and equip Russia for war, then once again it could have been very different. I say this because Germany lost a lot of morale and many thousands of soldiers. This also spread evenly the opposition the allies faced to defeat Germany from all sides, from the 60 divisions that were in North France to the 120 that fought the Russians. Who knows, the war hinged on so many factors and it is our role as historians to find the truth working through bias, but there's one thing I know for sure and that's the fact that many people died and that its also our role as historians to make sure that's never forgotten. By Michael Strong Marker, My apologies for this not all being typed up and being jumbled about, my finger was fractured before I had the opportunity to type it up, if you wish I can get the whole thing typed up, please ask if you do. ...read more.