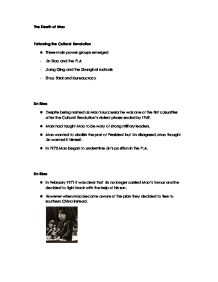 The Death of Mao

The Death of Mao Following the Cultural Revolution * Three main power groups emerged - Lin Biao and the PLA - Jiang Qing and the Shanghai radicals - Zhou Enlai and bureaucracy Lin Biao * Despite being named as Mao's successor he was one of the first casualties after the Cultural Revolution's violent phase ended by 1969. * Marx had taught Mao to be wary of strong military leaders. * Mao wanted to abolish the post of President but Lin disagreed, Mao thought Lin wanted it himself. * In 1970 Mao began to undermine Lin's position in the PLA. Lin Biao * In February 1971 it was clear that Lin no longer carried Mao's favour and he decided to fight back with the help of his son. * However when Mao became aware of the plan they decided to flee to southern China instead. ...read more.

Succession * Mao's health was deteriorating rapidly. * In 1973 Wang Hongwen was named as Mao's successor. * He had the 'correct' background, peasant, worker, soldier. * At the same time Mao returned Deng Xiaoping to government - he was experienced and Zhou was terminally ill with lung cancer. Jiang Qing * In 1973 Jiang launched the Anti Confucius campaign. * This was a thinly veiled attack on Zhou and Deng for wanting to replace Mao. * However they went further than Mao intended and so he gave Zhou and Deng his support. * Wang however became close allies with Jiang and the Gang of Four. * The succession was once again in question. Mao's Health * In 1975 Mao's health grew worse - he had cataracts, leaving him virtually blind and Parkinson's disease, he needed oxygen to breath and could barely talk. ...read more.

* Deng was returned once more and would replace Hua in 1980. Mao's achievements * China was changed in many ways; - It became a united country - Central government was established - She became a powerful country with nuclear capabilities - Women had more equality - The population were better educated and healthier - Food production was keeping up with the population - Improved communications and infrastructure - Industrial development e.g. steel. Mao's legacy * Tens of millions of people died violent deaths * Millions died during the famine * There were no human rights for people who were arrested - many died from their ill treatment * China lacked technology developed in the west * Attacks on intellectuals and the education system left China unable to develop and advance technology * Due to lack of investment the wages of farmers rose very slowly whilst those in the cities rose quickly * Advocating women's rights did not stop Mao from employing women simply to satisfy his own needs... ...read more.