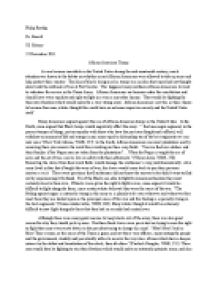 The Debate over African American troops in the Civil War.

Northern freed slaves were persistent on trying to earn the right to fight that some even wrote letters to the president trying to change his mind. ?Men! Men! Send us Men! They scream, or the cause of the Union is gone; and yet these very officers, representing the people and the government, steadily and persistently refuse to receive the very class of men which have a deeper interest in the defeat and humiliation of the rebels, then all others.?(Fredrick Douglas, W&B, 252) These men would then be fighting to win their freedom which would make an extremely patriotic army, and also a good motivator to win the war. Americans in the South began to worry that if they did not let African Americans pick up arms and fight for their country, then United States enemies would use them against themselves. ?We must either employ the Negroes ourselves, or the enemy will employ them against us.?(Montgomery, W&B, 266) This was a huge concern to all. It started to become extremely obvious that if not armed for the United States defense, the African Americans would definitely be made to fight against them. ...read more.

the Confederate States, secure their independence, and preserve their institutions, the President be, and he is hereby, authorized to ask for and accept from the owners of slaves, the services of such number of able-bodied negro men as he may deem expedient, for and during the war, to perform military service in whatever capacity he may direct.?(Confederate Congress, W&B, 275) Though those in the North and the South agreed and disagreed on many topics regarding the use of African American troops, most agreed that using blacks in war would increase their army size by a good hundred thousand. Due to the Emancipation Proclamation slaves in states that the union had no control over were given the right to fight in war. It was not until the 13th Amendment that slavery was totally abolished. African Americans finally were given full citizenship with the pass of the 14th amendment. Freed slaves persevered in trying to persuade the President to pass the Proclamation which then caused a domino effect, which eventually led to all slaves? freedom. African Americans are humans and are now protected by these Amendments, which started with their determination to be able to fight for there freedom. ...read more.