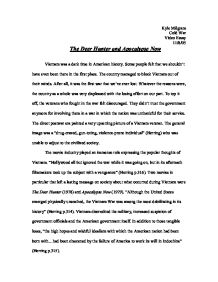 The Deer Hunter and Apocalypse Now

Kyle Milgram Cold War Video Essay 11/8/05 The Deer Hunter and Apocalypse Now Vietnam was a dark time in American history. Some people felt that we shouldn't have even been there in the first place. The country managed to block Vietnam out of their minds. After all, it was the first war that we've ever lost. Whatever the reasons were, the country as a whole was very displeased with the losing effort on our part. To top it off, the veterans who fought in the war felt discouraged. They didn't trust the government anymore for involving them in a war in which the nation was unthankful for their service. The direct postwar era painted a very upsetting picture of a Vietnam veteran. The general image was a "drug-crazed, gun-toting, violence-prone individual" (Herring) who was unable to adjust to the civilized society. The movie industry played an immense role expressing the popular thoughts of Vietnam. "Hollywood all but ignored the war while it was going on, but in its aftermath filmmakers took up the subject with a vengeance" (Herring p.316). Two movies in particular that left a lasting message on society about what occurred during Vietnam were The Deer Hunter (1978) and Apocalypse Now (1979). "Although the United States emerged physically unscathed, the Vietnam War was among the most debilitating in its history" (Herring p.314). Vietnam discredited the military, increased suspicion of government officials and the American government itself. ...read more.

These Russian roulette "death rounds" forced the film to be criticized for both glorifying the war and presenting the Vietcong as barbaric two-dimensional villains. Although there were no official references to the VC using Russian roulette as a war tactic, it mostly served as a symbol. The random insanity of Russian roulette is the perfect way of expressing the heated madness of America's ten year involvement in Vietnam. During the POW's captivity the VC Captain continuously slapped the Americans when they refused to participate in the game. The Deer Hunter was aimed to make the Vietcong look ruthless and evil. Unfortunately, in reality, the opposite was true. We were the barbarians. John Kerry, the democratic Presidential Candidate in the Election of 2004, clearly demonstrated the American "method of madness" in his speech to Congress. "We rationalized destroying villages in order to save them. We saw Vietnam ravaged by American bombs and search and destroy missions..." (Kerry). We were the bad guys invading the Vietnamese homeland and were acting ruthless and evil. The position that The Deer Hunter chose to take in depicting the VC so inaccurately is understandable because of the level of racism the country as a whole had toward the Vietnamese. At home, the public just knew that our boys were dieing out there through unfair, uninformed, guerilla warfare tactics. Our soldiers were being ambushed and attacked and couldn't even identify the enemy. ...read more.

They didn't even care, "...bomb 'em back to the stone age" , as long as we can surf! The American public felt that a lot of the bombing was unwarranted and sacrificed many lives and increased Vietnamese resentment toward American troops. Vietnam was a quagmire full of bombs, chemicals, and was an all out blood bath. After all, Capt. Willard said that the policy was to "...cut 'em all down with machine guns and then give 'em a band-aid." The American public was very displeased with this policy because it was the complete opposite of what our nation has preached for all of the years of our existence. Both of these films have played a major role in expressing the contemporary political issues at the time of their release. Even though they were released within a year of each other, they each respectively focused on separate issues of their time. The Deer Hunter's main focus was to put across the message that it didn't matter whether we won or lost the Vietnam War. The more important issue it was aiming to address was the psychological effects it had on the troops fighting and their families at home. Apocalypse Now, on the other hand, showed how the American public was deceived. Morals and ethics were thrown out the window and racism heavily influenced the decision making of the higher ranking officials during the war. Each film played a major role in opening the eyes of the American public and gave substance to their arguments when questioning the policies of our powerful central government. ...read more.