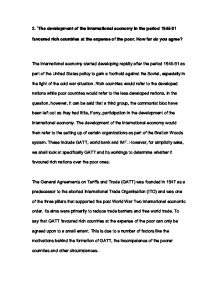 'The development of the international economy in the period 1945-91 favoured rich countries at the expense of the poor.' How far do you agree?

2. 'The development of the international economy in the period 1945-91 favoured rich countries at the expense of the poor. How far do you agree? The international economy started developing rapidly after the period 1945-91 as part of the United States policy to gain a foothold against the Soviet, especially in the light of the cold war situation. Rich countries would refer to the developed nations while poor countries would refer to the less developed nations. In the question, however, it can be said that a third group, the communist bloc have been left out as they had little, if any, participation in the development of the international economy. The development of the international economy would then refer to the setting up of certain organizations as part of the Bretton Woods system. These include GATT, world bank and IMF. However, for simplicity sake, we shall look at specifically GATT and its workings to determine whether it favoured rich nations over the poor ones. The General Agreements on Tariffs and Trade (GATT) was founded in 1947 as a predecessor to the aborted International Trade Organisation (ITO) ...read more.

Naturally, GATT's actions were focused on helping the Western countries, which happened to the more developed and thus wealthier countries compared to the 2nd and 3rd world countries, recover economically so that they could withstand the communist threat posed by the Soviet Union. Despite GATT's commitment to free world trade, the interests of the USA, characterised by its policy of Containment especially after World War Two were the dominant factor behind the GATT's policies. This was evident in the way the USA sponsored free trade and gave aid through the Marshall Plan in 1947. In conclusion, GATT favoured the rich at the expense of the poor can only be agreed to a small extent. Indeed, the rich benefited from while GATT was in place than the poor but to say it was at the expense of the poor would be too extreme. With GATT inherently bias towards the US, it was the inability of the less developed countries to integrate into the world economic order that caused them to suffer. But, it is difficult to say that the poor lost out at the expense of the rich with developing countries experiencing 5 to 6% of economic growth at least in the first 25 years after World War Two. ...read more.