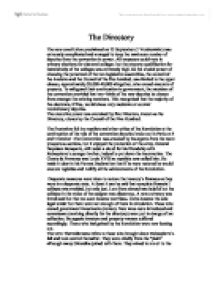 The Directory - The new constitution proclaimed on 23 September (1 Vendemiaire) was extremely complicated and arranged to keep the maximum number of deputies from the convention in power.

The Directory The new constitution proclaimed on 23 September (1 Vendemiaire) was extremely complicated and arranged to keep the maximum number of deputies from the convention in power. All taxpayers could vote in primary elections for electoral colleges but the property qualification for membership of the colleges was extremely high. So the crucial power of choosing the personnel of the two legislative assemblies, the council of the Ancients and the Council of the five hundred, was limited to the upper classes, approximately 30,000-40,000 altogether, who owned amounts of property. To safeguard their continuation in government, the members of the convention provided that two-thirds of the new deputies be chosen from amongst the existing members. This recognised that the majority of the electorate, if free, would chose very moderate or counter revolutionary deputies. The executive power was exercised by five Directors, known as the Directory, chosen by the Council of the Five Hundred. The frustration felt by royalists and other critics of the Revolution at the continuation of the rule of the convention deputies broke out ...read more.

New taxes were introduced and commissars (working directly for the directory) were put in charge of tax collection. Bourgeois investors and property-owners suffered accordingly. Those who had gained by the Revolution were now loosing out. The term Thermidoreans refers to those who brought about Robespierre`s fall and took control thereafter. They were chiefly from the "plain" although many Girondins joined with them. They aimed to revert to the Revolutionary principles exposed in 1789. They sought a "moderate" route, as they were not monarchists (they had voted for the king's execution) but they wanted to control the sans-culottes and limit their influence by ending the terror. The Thermidoreans drew up a constitution to limit the power of the sans-culottes and provide protection for property. The convention agreed to the changes before its abolition and the formation of the Directory. Gracchus Babeuf attempted to set up a Conspiracy of Equals. This was a rising by a small group of well-disciplined revolutionaries against the wealthy on behalf of the people. ...read more.

This consisted of Belgium and the United Provinces. In 1795 Prussia made peace with France so she could pay some attention to the partition of Poland. Spain also made peace with France and then became allies in 1796. Austria was to be defeated by two advancing French armies, one across Bavaria and the other one under Napoleon would march across the Alps into Italy and then onto Vienna. Napoleon's campaign was brilliant and he defeated the Austrians, taking Milan and Mantua in the process. When the Austrians pushed the army of the Rhine back, Napoleon ignored the orders of the Directory and concluded the Treaty of Campo Formio in October 1797. The Second Coalition brought renewed warfare against Austria and Russia. After initially taking all of Italy, Frances armies were driven out of Switzerland and Italy and back to the Rhine. Arguments between Austria and Russia saved France. The directory failed, as it was able to restore stability back to France. Its main problems were war, debt, inflation, lack of order but most of all the problems that had been left behind by the Terror. ...read more.