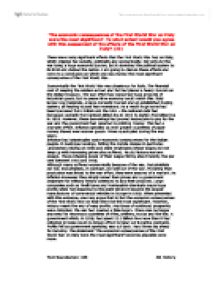 'The economic consequences of the First World War on Italy were the most significant'. To what extent would you agree with this assessment of the effects of the First World War on Italy? (22) There were many significant effects that the First World War had on Italy, which crippled her socially, politically and economically. Not only did the war bring a huge economic burden, but it stretched the political system to its limit and divided the nation. I am going to discuss these effects and come to a conclusion on which one was indeed the most significant consequence of the First World War. Economically the First World War was disastrous for Italy. The financial cost of keeping the soldiers armed and fed had placed a heavy burden on the Italian treasury. The war effort had consumed huge amounts of industrial goods, but no peace time economy could match this. Italy lacked raw materials, a large domestic market and an established trading system, all leading to post war recessions. As a result huge sums had been borrowed from Britain and the USA - the national debt had increased radically from sixteen billion lira in 1914 to eighty-five billion lira in 1919. However, these borrowings had proved inadequate to pay for the war and the government had resorted to printing money. ...read more.

During 1919 over a million workers took part in strikes and the membership of Socialist trade unions shot up from a quarter of a million in 1918 to two million in 1920. Finally, soldiers returning from the war were plunged into this deteriorating economic situation. The hoped-for prosperity was nowhere to be found. Industries whose profits were falling did not take on new workers. Unemployment was rising and broke the two million mark during 1919. To the soldiers this seemed a very poor reward for their sacrifices. As the economy worsened political divisions widened. The industrial workers flocked to the Socialist Party, whose membership rose from about 50,00 in 1914 to about 200,000 by 1919. The party had long abandoned the commitment to gradual reform that Giolitti had tried to encourage during the pre-war years. It now advocated revolution. Inspired by the Russian Revolution of 1917, socialists called for the overthrow of the liberal state. Many middle classes were terrified. In this state of fear, many conservative Italians were disgusted that the government appeared to be doing nothing to meet the threat. Instead of using the power of the state to crush strikes and to harass Socialists, the Liberal government of Francesco Nitti was urging industrialist to make concessions to workers. Shopkeepers had been alienated in June 1919, by what they sa3w as a government surrender to rioters who were protesting against the spiralling price of food. ...read more.

For such men, Liberalism and the parliamentary system had proved abject failures. A powerful, dynamic Italy would have to be achieved by other methods... In conclusion, at a first glance there is some strong evidence that would suggest that the economic crisis was not in fact the worst consequence of WWI. The war certainly divided the war politically and led to the Biennio Rosso. But, I feel these other consequences of the war were greatly magnified if not caused indirectly by the economic crisis itself. It was in fact the workers resentment towards longer hours, a fall in wages (due to inflation) and the ban on industrial action which brewed hatred towards the political system and led to the growth of Socialism. One may argue that if the economic situation had not been so bad that support for Socialism may not have grown so rapidly and in turn the Bienno Rosso may not have happened. The socialists would not have had enough support to prove a real threat and so their strikes (if there were any) would have been insignificant and their ideal of revolution may not have spread fear amongst the middle class and the rights anger towards the government's inability to control the perceived Socialist threat. Therefore, in conclusion, I do believe that the economic consequences of the First World War on Italy were the most significant. ?? ?? ?? ?? Tom Saunderson 13S AS History ...read more.