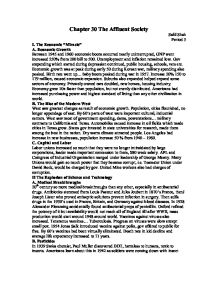 Chapter 30 The Affluent Society Salil Shah Period 3 I. The Economic "Miracle" A. Economic Growth Between 1945 and 1960 economic boom occurred nearly uninterrupted, GNP went increased 250% from 200 bill to 500. Unemployment and inflation remained low. Gov smpending which started during depression continued, public housing, schools, vets etc. Economic growth was at peak during early 50 during Korean war, military spending also peaked. Birth rate went up... baby boom peaked during war in 1957. Increase 20% 150 to 179 million, caused economic expansion. Suburbs also expanded helped expand some sectors of economy. Privately owned cars doubled, new homes, housing industry. Economy grew 10x faster than population, but not evenly distributed. Americans had increased purchasing power and highest standard of living than any other civilization in world. B. The Rise of the Modern West West saw greatest changes as result of economic growth. Population, cities flourished, no longer appendage of east. By 60's parts of west were important cultural, industrial centers. West saw most of government spending, dams, powerstations... military contracts to California and Texas. Automobiles caused increase in oil fields which made cities in Texas grow. States gov invested in state universities for research, made them among the best in the nation. Dry warm climate attracted people. Los Angeles had increase in new businesses, population increase 50 % from 1940 - 1960. C. Capital and Labor Labor unions increased so much that they were no longer intimidated by large corporations, leader made important concession to them, $80 week salary. AFL and Coingress of Industrial Organization merged under leadership of George Meany. Many Unions would gain so much power that they became corrupt, i.e. Teamster Union under David Beck, would be charged by gov. United Mine workers also had charges of corruption. II The Explosion of Science and Technology A. Medical Breakthroughs 20th century so more medical breakthroughs than any other, especially in antibacterial drugs. ...read more.

American reacted with hostility to large scale beuracracies. Many books were published by sociologists analyzing the role of men in society and how their thinking has changed F. The Beats and the Restless Culture of Youth A group of young poets and writers emerged known as the beats who criticized the conformity and sterility of American culture. Jack Kerouac most famous out of the movement wrote popular novel called, On the Road. Beats had ideas stemming from limitless possibilities, and decline of traditional values of thrift. Young Americans were being raised in a new type of culture to expect fulfilling lives. 1960's saw a major increase in juvenile delinquency. Adults were alarmed at how teenager were dressing more like the image of the delinquent teen, adopting hobbies in fast cars and more sexually active due to birth control. James Dean an actor portrayed this image in real life and in film, was an icon for many teenagers in America. G. Rock n Roll Elvis Presley became a symbol of youthful determination to push boarders of acceptance. Had rebellious style which imitated the biker look. Presley's music was derived from rhythm of black R&B which appealed to young whites. Rock n roll also pulled from country music, gospel, and jazz. The rise of musicians like Pres;ey could have come from the public's lack of acceptance of black artists. But the 50's did see increase in balck musicians also, Temptations, Little Richard, BB King. Popularity of new music style came from change in radio and television programming. Radio Hired DJ's for stations dedicated to music programming. TV shows, showcased the new music and spread its popularity, and made Dick Clark famous. Radio and tv encouraged record sales. Juke boxes, and 45s promoted rock n roll as well. Music promoters were caught in a scandal when new hit public that they would pay dj's to play music. ...read more.

When prime minister of Iran began resisting presence of Western corporations, US was alarmed, they would help stage coup and elevate the Shah of Iran. When Egypt began trade with soviets, Dulles reacted by saying US would not help build Dam across Nile. Nasser, leader of Egypt reacted by taking control of suez canal from Britain. France and Britain landed forces to drive out Egypt as Israel attacked Egypt. US fearing another world war denounced the situation with the UN. US controlled much of the island of Cuba. In 1957 a resistance movement against leader Batista led by Castro made him leave country as Castro marched in and established his own government. Castro would begin taking assistance from soviet union, US would react by cutting diplomatic relations. D. Europe and the Soviet Union Eisenhower admin would meet with Soviet foreign relations in Geneva but nothing good would come out of it. Relations b/w countries would worsen when a pro-democratic Hungarian Revolution was crushed by soviets. US did not want to intervene. E. The U-2 Crisis Nikita Khrushchev, new soviet premier would suggest that they visit each other country and then in Paris to discuss Berlin. Eisenhower agreed. During the conference in Paris, new came the Soviets shot down and held the captain of a U-2 plane flying over Russian air space. Khrushchev would call off the conference. At the end of his term tensions with Soviets were even higher. In his farewell speech he warned of unwarranted influlece andand cautioned against domestic and foreign affairs. And said US should act more boldly. VII. Conclusion The 1950's was prosperous time for most of America, as people moved in larger home in the suburbs and families had more children in a post war baby boom. After Korean War, the Eisenhower administration brought calmness to the white house. Television was the largest medium of mass culture, spreading middle class images and traditional values. A resistive youth culture also emerged. Blacks escalated their efforts remove segregation with emergence of new powerful leaders and help from supreme court. ...read more.